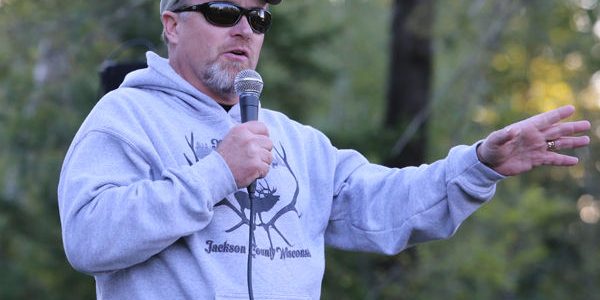 Gathered for their annual “Bugle Days Rendezvous” recently near Clam Lake, 65 Rocky Mountain Elk Foundation (RMEF) members heard an update from the state’s chief big game biologist about the health of the elk herds in Wisconsin.

They also heard a positive report from the Chequamegon-Nicolet National Forest supervisor about expanded timber harvest in the national forest that will benefit the elk herd.

During their Sept. 11-13 Bugle Days, RMEF members dismantled an elk acclimation pen on the Thornapple-Haystack Grade in the Sawyer County Forest south of Winter, took part in tours led by DNR biologists of the area elk range, and held a campfire cookout and program.

RMEF regional director Lou George said the rendezvous serves as a town hall meeting about the elk and is a chance for people to speak one-on-one with DNR staff.

The RMEF has committed $300,000 to $500,000 to the reintroduction of elk into Wisconsin, George said. He added that the U.S. Forest Service is “the best partner of the RMEF nationwide.”

Kevin Wallenfang, chief big game biologist for the DNR, related details of this year’s project to capture up to 50 wild elk in Kentucky, transport them to Jackson County and release them into the state forest east of Black River Falls. He praised Mike Zeckmeister, northern Wisconsin wildlife supervisor, for “a great job” in leading the 48-day project to capture elk in Kentucky and bring them to Wisconsin. Thirty-five staff people were involved, he said.

Wisconsin has an agreement with Kentucky to import as many as 150 elk from that state’s herd of 10,000 elk over a three to five-year period. Half will be released into the public forests in Jackson County and half will be added to the existing Clam Lake area herd, which now numbers about 150. The DNR has a goal of 1,400 elk across the habitat range in the four-county area surrounding Clam Lake.

The elk capture process in Kentucky “was tough sledding,” Wallenfang said. “But we didn’t have anyone get hurt. Kentucky has 250,000 acres lined up for us that are loaded with elk, and we expect to capture a total of 50 elk this year. It’s a miracle.”

Following the disease-testing quarantine, 26 elk were transported in horse trailers to an acclimation pen in Jackson County in March. A few weeks later, ”We started to lose a few of the animals,” Wallenfang said. Five elk died from a malady that veterinarians determined was a tick-borne disease that the elk contracted in Wisconsin.

Such die-offs “are not uncommon in nature. It’s a roller-coaster ride, but we continue to have our eyes on the prize,” he said. One elk was killed by a vehicle and another was killed by wolves, he said.

Finally 19 adult elk and four newborn elk calves were turned loose on Aug. 20 and “things are going pretty well” there, Wallenfang added. “The elk are fat and happy and getting around on the landscape, doing what they want to do.

Elk “are heavily affected by brainworms and we’ve lost elk at Clam Lake due to that,” Wallenfang added. When an elk gets brainworm, it will act differently and the rest of the herd will shun it. When it hangs out by itself, it’s more vulnerable to attack by wolves, he said.

At Clam Lake, “We continue to do our assisted dispersal, picking up elk and moving them to new areas “to help them spread out over the habitat,” Wallenfang said.

The DNR estimates that about 35 calves were born to the Clam Lake elk this spring, he said. “That’s a great year, really good news for the local population here. Hopefully in the current mating season, they will be making a lot more calves which will be dropped next year.”

The DNR has trail cameras in the area to monitor the herd, which includes radio-collared elk, newborn calves and those without collars, mostly bulls, Wallenfang said. “We are not collaring the spring calves now.” The radio collars last five to six years, he added.

Each elk brought from Kentucky will have a GPS collar so its movements can be monitored without DNR staff having to drive around in an antenna truck, he said.

Wallenfang said the DNR wants to bring 50 more elk from Kentucky to Jackson County next year. Thereafter, the focus will be on adding 75 elk to the Clam Lake area herd.

Wisconsin “will have no more than five years to bring those animals here, because other states are lined up to get elk from Kentucky,” he said. “Kentucky has been great to work with. Their elk are disease-free.”

He said that in exchange for the elk, Wisconsin DNR staff will help Kentucky create “great ruffed grouse habitat.”

Paul Strong, supervisor of the Chequamegon-Nicolet National Forest (CNNF), said “There is a lot of wonderful habitat here for elk, but it takes a lot of effort to create and maintain it. We have cold winters and hot summers, so environmentally it’s not an easy place to make this happen. Your (RMEF) patience and perseverance is incredibly admirable to me.”

Strong said under the 2014 Farm Bill, the Forest Service is able to keep timber sale revenue by contracting with a partner to do the timber sales, and then applying the revenue to “sustainable forest management.” On the Chequamegon-Nicolet, these amounts to an additional 25 million board feet of timber marked and cut in the first year and $1 million to $1.5 million in revenue per year, he said.

Also for the first time, “Good neighbor authority” allows state employees to work on national forest lands and will result in more timber sales “and a lot of money left over,” he said. In the first year, the DNR will take 25 million board feet of timber “that my staff could not get to until a future year, and they will get that timber marked and sold in the first 15 to 18 months.”

The Forest Service will set up the sales, then “hand off the baton to the DNR,” which will set up the timber sales, bid them out, award the bids, administer the sales and then do the reforestation, he said.

For the first time in several decades, the CNNF will get more than 100 million board feet of timber cut in a year, Strong indicated. “This is really good news. We will work more closely with the DNR than in the past, and with our partners will get great conservation work done.”

At Clam Lake, the Forest Service is planning to clear cut older stands of aspen, “the preferred elk woody food,” and regenerate those stands, Strong added. The new stewardship contracts and Good Neighbor Authority will allow the USFS to “implement those projects a lot more quickly than we thought previously,” he said.

Strong added that the Forest Service works to create and maintain forest openings, which benefit the elk.