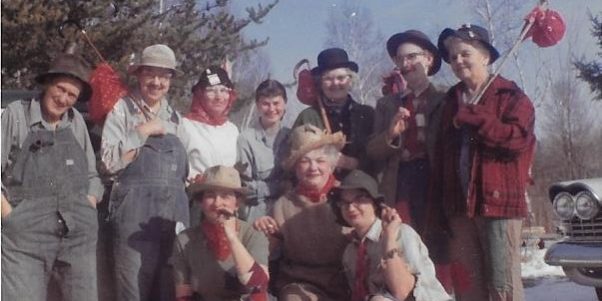 After taking a bit of a break, I am once again returning to my historical snippets. I will jump around a bit, revisiting things from old Community Club records and correspondence that detail the events that were taking place in Clam Lake during various eras.

In the 50’s and 60’s the Community Club had a very active group of members who had a real spirit of fun. Although dances were common at the various parties over the years, this particular group, headed by Jack Dumanch, (President) held square dances. Here is an article from a March 1961 paper about one such event: 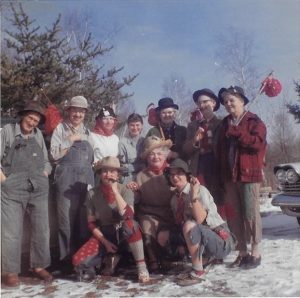 “It’s lady down and bow to the gent, first gentleman down and dosy do.” It was a Virginia reel at the Clam Lake Community’s “Hard Time” dance and pot-luck supper given on Sunday, March 5th at the Community hall beginning at 5:30 o’clock.

After a fine supper, the March meeting of the Community Club was called to order by President Jack Dumanch. The meeting was then turned over to Clarence Day, a guest from Ashland, who introduced Judge Cate, also from Ashland, who is running for re-election. The Judge then addressed the meeting.

After the meeting, dancing was in order. Some members had come dressed as hoboes and hillbillys and their costumes added gaiety to the evening’s entertainment. A Virginia reel in which the children took part, regular dancing, and community singing were features of the evening.

It was finally “that time” again, and everyone went home. Thus ended another good “family get together” at the Clam Lake Community Hall.

The Club secretary, talking of the evening, says the meeting was adjourned and an enjoyable evening of dancing and laughing over the many Hobo costumes was had. Good times!

I will include a photo taken of some of the participants. Looks like fun!