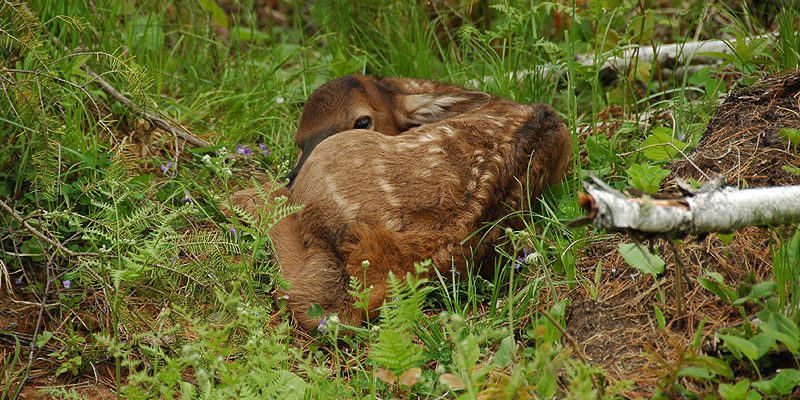 Current Status: The winter of 2013/2014 was particularly hard on Clam Lake elk. Winter Severity Index accumulated 167 points in Winter, WI. This made it the most severe winter on record for this area, surpassing the previous record set in 1995/1996 at 158 points. Sub-zero temperatures started on opening weekend of the 2013 gun deer season and persisted into April, 2014. Snow depths exceeding 30 inches persisted for most of the winter. This combination of cold and snow depth extremes contributed to approximately 22 percent mortality of cows and 20 percent mortality of bulls during this period. Historic average calf mortality is about 50 percent, but was exceeded in 2014 when it was estimated at 85 percent. As a result, we experienced negative herd growth in 2014 with the Clam Lake herd dropping to about 120 animals by late March 2015. If there was little carry over impact on the elk going into the 2014 September elk mating season we would expect about 32 calves born. However, if there are carry-over impacts, we would expect approximately just 19 calves born. On the positive side, the winter of 2014/2015 was mild, with only 46 Winter Severity Index points. Spring arrived early with winter green-up starting on May 5th south of Hwy 70, and May 7th up on Hwy 77 near Clam Lake. During years with early springs we see lower bear predation, healthy and frisky calves, healthy cows and overall increased survivability. It all depends whether cows had recovered enough by September to be bred. Early indications (June 2015) are that we expect the number of calves born to be closer to the high end of our predicted range, but we’ll wait and see what 2015 tells us.

Elk Research on the Clam Lake Herd: DNR Science Services is initiating a trail camera survey system during the summer of 2015. 156 cameras will be placed in an 81 square mile grid within the elk range. Our hope is that this research will yield new methods for us to monitor and estimate elk populations in the future.

Elk Health & Mortality: We’ve had 22 elk die since March 2014, 11 due to wolves, 2 due to vehicles, 1 due to bear, 6 unknown, and 2 due to birthing complications. It is likely that most of these losses were related to poor health condition associated with the extreme winter conditions of 2013-14. In addition to poor physical condition observed post winter, 30-40 inches of snowmelt and 26 inches of rain fell during the month of June, 2014, resulted in excellent brood habitat for mosquitos. The deep snows protected overwintering larvae from the extreme cold, and the opulent standing water provided excellent brood habitat in the late spring and summer. “Old Timers” agreed, 2014 was the worse mosquito year in memory. Summer elk images on camera grids showed elk under stress! Delayed molt of fur, emaciated body conditions into late July and early August, and raw abrasions on front shoulders and hips from biting insects and rubbing were all observed. Relief from mosquitos didn’t occur until mid to late August. Camera images and staff observations revealed only a handful of surviving calves of which 2 were near Clam Lake and 4 in the Butternut group. Though calves were observed born in the Moose Lake and Winter groups, none survived.

Conditions during the winter and spring of 2015 were much better. We had a relatively mild winter and had an early spring. These conditions normally result in both good elk survivability and good productivity, ultimately leading to prosperous elk. The number of calves will depend immensely on what condition cows were in last September. Time will tell whether we have fair numbers of calves born in 2015. Those that are born should have a greater chance of surviving and cows should be in excellent shape heading into the 2015 September mating season.

Winter Elk Trapping and Assisted Dispersal Project: Trapping locations and numbers set varied over time: 3 trap sites from December 18, 2014 through February 2, 2015, 2 trap sites until February 16th, and 1 trap site until March 5, 2015. We made 3 attempts at Butternut, capturing 12 elk on February 2 and moving 5 cows and 4 calves from Butternut to the acclimation pen at the Flambeau River State Forest (FRSF) site. We released three cows unhandled from the Butternut site. We made 3 attempts at the trap site near Day Lake, capturing one bull on February 16, 2015. We then made 2 attempts at the Lower Clam Lake site, capturing one bull on March 5, 2015. Both bulls were translocated to the acclimation pen at the FRSF, resulting in 11 elk, 6 females and 5 males. Taking into consideration animal health and acclimation protocol the holding period was 45 days post capture of the last elk placed in the pen. This resulted in all elk being released on April 20, 2015

Population Monitoring and Elk Education: Telemetry efforts primarily consist of mortality checks in the Clam Lake area. Weekly locations continue to be conducted on all elk groups including the expanded range south of State Highway 70, near Moose Lake and Butternut. The Clam Lake elk project staff continues to work with various schools, colleges, community events and others to educate students and the public on the challenges and benefits of elk reintroduction efforts.

Elk Habitat Development and Partnerships: We have root-raked, dragged and cover planted 12 acres, and have 53 acres prepared to initiate field work in the Flambeau River State Forest during the summer of 2015. We have received funding and work support for this project from the Rocky Mountain Elk Foundation, US Fish and Wildlife Service, Sawyer County Forestry Department, WDNR, Friends of Wisconsin Wildlife, and Town of Winter. The WDNR and US Forest Service (USFS) are currently negotiating to establish a partnership where WDNR Forestry staff will set up timber sales on the Chequamegon\Nicolet National Forest (CNNF). It is hoped that this work will greatly increase acreage of young forests, and the associated wildlife habitat benefits, including a huge increase of forage and predator escape cover for elk in the Clam Lake area of the elk range. Clam Lake Elk Project staff cooperated with people from several partners on various aspects of capturing, moving, holding and testing Kentucky elk near Black River Falls to reestablish a herd in Jackson County. An agreement between Wisconsin and Kentucky is in place to provide a total of 150 elk over a 5-year period. Half of these elk are planned for release in the Clam Lake Elk Range starting as early as the winter/spring of 2017.

Upcoming Events: We will be deploying trail cameras in July with Science Services and continue field work on our 65 acre forest openings projects on the FRSF and Sawyer County Forest.