Historic chapel in the pines closes 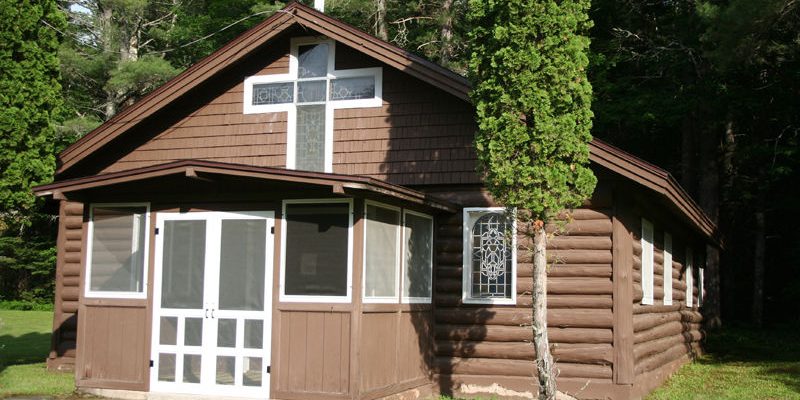 For the past 70 years, the St. George Chapel has nestled in towering pines just outside the Northwoods community of Clam Lake.

There is nothing grand or gilded about this small log structure, however, there is something quite endearing about its natural simplicity and grace, that lends it a certain authentic sanctity. Built of Clam Lake logs, the chapel appears to have grown quite naturally from the forest around it.

For 70 years the chapel has been the site of seasonal Catholic sacraments including weekly masses, weddings, baptisms, and funerals. There is a simple screen porch at the entrance for welcoming worshipers, and the long, straightforward interior has a center aisle with beautiful, handmade half-log pews that can accommodate 150 people. The ceiling is open with log beams. Windows run down both sides with a rustic altar located at the front. There is a beautiful statue of St. George slaying a dragon and a corner table of traditional red candles.

But from November to May, the chapel has stood silent for the lack of a source of heat.

The chapel closed each season at the arrival of snow and ice and has stood up to 70 harsh winters. With careful maintenance it has persevered, but there is no water in the building, and it is served by a simple, traditional outhouse.

Clam Lake resident Andrea Krygoski, who writes the weekly “Clam Lake News” column for the Glidden Enterprise, has written about the concerns regarding the closure of the St. George Chapel.

“There are many people who are sad to hear that St. George is closing,” Krygoski said. “I have heard many comments about missing the chapel that was sort of a part of life up here. Especially now that the tourists are returning I am hearing that for some of them attending mass at St. George was a summer tradition that they will miss.”

As the years have passed, Krygoski said there were fewer and fewer people attending the Saturday masses, and there were not enough contributions to keep it open.

“There are maintenance costs, and it became difficult to find people to clean the chapel along with the pressing shortage of priests,” Krygoski said.

Longtime Clam Lake resident Lynne Rice said she serves as the historian for the community and noted that it will become more complicated after the current priest, Father Simon, leaves and the priest who will serve as his replacement arrives.

“I am told the new priest does not have a driver’s license or a car. That makes things difficult given the busy schedule,” Rice said.

St. George was a part of the Most Precious Blood Parish Cluster centered in Glidden, which also includes the Most Holy Rosary Catholic Church in Mellen. Masses are also celebrated at the Mellen Manor Nursing Home and at Hillside Village.

Rice shared the history of the chapel, which she says stands as a stirring tribute to a beloved son named after his patron Saint George.

George “Buddy” Zillig was 20-years old when he died in a car crash.

Henry (Hank) and Mamie Zillig’s son, Buddy joined the Navy during World War II. He served from 1942 until 1945, at which time he returned to his family home in Clam Lake. His parents owned and operated a small lodge and cabins across Highway 77 from the chapel.

After making it unscathed through the dangers of war, Buddy was killed on Highway 77 when he hit a beer truck.

The young life of their son, cut short after bravely serving his country in the war, sparked his parents to donate the land across from their home and to begin building the memorial chapel to be called St. George Chapel.

“The Forestry contributed the logs and much of it was built by Hank,” Rice said.

“My father was a wood carver, and he fashioned the sign for the chapel modeled after the statue of St. George slaying a dragon,” said Rice, adding that her father, who made his livelihood from wood carving, sold 99 percent of what he carved.

She said that she attended Mass at St. George as a child and was married there in 1978, saying it was the natural location for her wedding.

“I have to add that it wasn’t a long walk down the aisle!” she laughed.

When the construction was complete on the chapel, it was dedicated on June 21, 1949. It stood as a memorial and a gathering place for the regular area Catholics and also for the “summer people” cottage owners and tourists.

“Even though it was the time of year that the chapel was being prepared to be closed for the season, there was an effort to hold ‘deer hunting mass’ for the hunters who attended at 5:30 a.m., and I heard that many believed it gave them a special blessing for their safety and for a successful hunt,” Rice said. “We still have hunters ask about the St. George Chapel masses for deer hunters.”

She noted that it was rather sad that in this 70th year it would be closed.

“We do not know what the church intends to do with this property,” Rice noted. “We are encouraged by the fact that the notice in the paper said ‘closed until further notice.’ We are hoping that means that there may be a future for the chapel.”