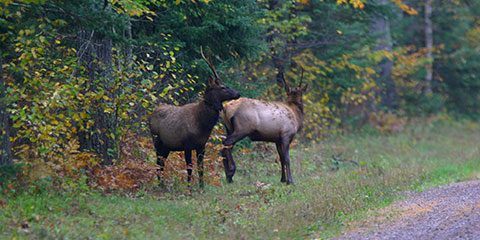 January’s trapping efforts mark the third winter of elk capture in Kentucky. The past two years those Kentucky elk were released in Jackson County in an attempt to establish a “southern” elk herd in the Black River State Forest.

This year, those Kentucky elk will be released in the Flambeau River State Forest near Winter to augment what’s known as the Clam Lake herd, according to Kevin Wallenfang, the DNR’s state deer and elk ecologist.

That herd of 29 elk includes five immature bulls, with the remainder being mostly mature cows that should be pregnant. Most of the calves are also females.

“We had lousy trapping conditions – the same warm weather that we had in January also hit Kentucky,” said Wallenfang.

Most of the ground was bare, so elk did not react well to the baited sites that are used to attract elk into trapping areas.

“It was rainy and muddy, so access to some of the spots was difficult. To top it off, Kentucky had a record acorn crop last fall. We were lucky to get 29 elk,” said Wallenfang.

“There were no injuries, no accidents – elk or people – for the third year. We have a great relationship with Kentucky. They’re working hard on our behalf, and we really appreciate that,” said Wallenfang.

The Wisconsin DNR sent its personnel to Kentucky on Jan. 2 to begin setting up traps. Trapping efforts ended Feb. 5.

“We agreed to stop trapping the first Friday of February. From a health testing standpoint, the hauling and calving, that’s about when we need to shut everything down,” said Wallenfang.

According to the protocol set up for this operation, all of the trapped animals have to exist in one herd for 30 days before they can be moved. That clock started ticking when the last elk went into the pen.

In the meantime, all 29 elk will go through health checks beginning the first week of March and the mature cows will have pregnancy checks. Once the herd has been together for 30 days, the elk can be moved to Wisconsin, where they will finish out the required 120-day quarantine period in a corral.

The holding pen that was used the past two years in Jackson County has been dismantled, hauled to the Flambeau River State Forest near Winter, and set back up again. The 90,147-acre state forest is located in north-central Wisconsin in Sawyer, Price and Rusk counties.

“We are done in Jackson County. We released 72 elk in two years there, and the goal was 75,” said Wallenfang.

Another goal is to add animals to a herd that hasn’t been hit yet by wolf predation.

“We have not lost an elk yet to predation in the Flambeau River State Forest. That area also has better habitat in the sense that they’re better able to evade predators than elk in the Clam Lake area. That’s one of the reason we’re putting elk there instead of in Clam Lake. The younger forest works better for elk,” he said.

That’s not to say that things can’t start looking up for the Clam Lake herd. Wallenfang said the Forest Service now has some timber sales going on in the Clam Lake area, with a lot of cutting going on in the Torch Lake area through the Good Neighbor Policy that allows DNR foresters to set up sales on federal lands.

“Predator impacts have been low so far and we expect good calf recruitment this spring. We have about 35 breeding age cows in the Clam Lake area, and we expect 20 to 25 calves in the Black River Falls area,” he said.

The northern elk estimate last year was about 165 animals, but that’s now probably in the 155 to 160 range, since some animals were lost.

Wallenfang said the northern herd, with animals near Clam Lake, Winter, and Butternut, is heavy on bulls. Considering that calves and yearling cows do not breed, that leaves herd growth to the approximately 35 adult cows.

This year’s operation is running primarily on money funneled into the state from the Rocky Mountain Elk Foundation. The major contributors the first two years were from Jackson County.

“RMEF has been big supporter in the Clam Lake area for long time,” said Wallenfang.

Next year may be the last year of trapping elk in Kentucky. Wisconsin has a five-year agreement with that state, but Wallenfang hopes they can trap enough elk next year to end the program.

Elk returned to Wisconsin in 1995 with a shipment of 25 animals from the Pigeon River State Forest area of Michigan. This year, 2017, marks the 22nd year of Wisconsin’s elk recovery project. The state needs a solid 200 elk before a hunting season can be considered.

Last year, the DNR brought in 39 elk to Jackson County; 50 elk were released last summer after calves were born.

The first year, 23 elk were released in Jackson County. Of those elk, 13 are still alive, said Wallenfang.