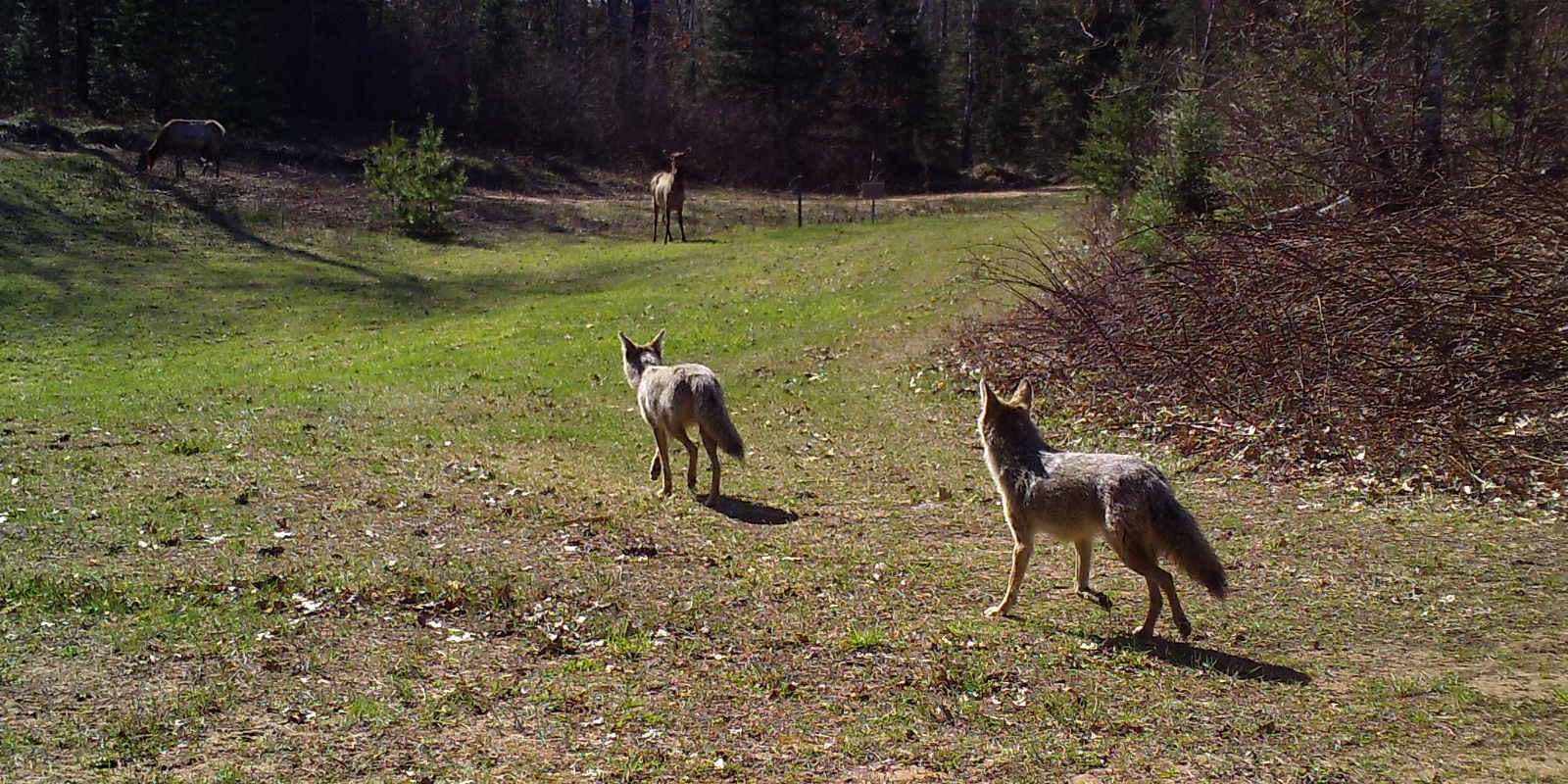 Fall was definitely in the air this past week! Brrrr! We had nights hovering right around the freezing mark with some areas undoubtedly slipping below. Was a mix of sun and dreariness. Hard to imagine that only a few weeks ago one was sleeping with windows open to stay cool. Thankfully, I’m sure we can rely on warmer days ahead. This is just a little reminder of what’s to come. One good thing! – no mosquitoes.

A CASUAL ENCOUNTER: Chris Frasch shared one of his Snapshot photos of a couple of cow elk meeting two coyotes as they shared the same forest walkway. In the photo it almost looks as if they are saying to each other, “Oh! Hi!” I decided to ask Josh Spiegel, our elk biologist, about the relationship between elk and coyote. Seems even though the coyotes are predators and an elk could be considered prey, the two species seem to coexist fairly peaceably. The coyote poses no serious threat to an adult elk. Coyotes have been known to take the occasional small baby calf but once they start to grow the coyote is at a decided disadvantage. Plus, the elk are herding animals thus providing more protection from smaller predators such as coyotes whom typically travel in very small groups of 2 to 3. Josh reminded me to keep in mind that the forest walkways, some of which the Snapshot program monitors, show that a variety of animals use those same trails and often cross paths.

INFO ON SNAPSHOT: Snapshot Wisconsin is a a volunteer-based project which utilizes a statewide network of trail cameras to monitor wildlife year round. These networks of cameras have played an integral role in monitoring the reintroduced elk herds in Black River Falls, Clam Lake and the Flambeau State Forest. The resulting data is used to inform and benefit herd management decisions. If you are interested in becoming part of Snapshot or want to learn more about the program you can go to dnr.wi.gov and search “Snapshot Wisconsin”.

CONGRATS go out to Wyatt Cook, on a successful bear harvest. Proud grandparents are Barb and Jack Cook.

CAMPGROUND UPDATE: I happened to have a chance to speak with some members of the Forestry while over at Day Lake asking them how the holiday weekend went. They said all their campgrounds were filled to capacity for the last big weekend of summer. Darrell Fox, Day Lake Campground Host for the 2020 season, left the Tuesday after Labor Day to begin his next adventure in South Dakota. If he returns next year, I am sure he will have many fine tales to tell. We wish him and his sidekick, George, a great winter!

HISTORY MOMENT: Howard Scotford recorded in his Journal that on September 13th 1916 Grandad (Henry) Taylor was found dead. In Howard’s Journal, Henry is always referred to as Grandad Taylor since he was his wife, Hazel’s, grandfather. Henry was a great lover of the woods and enjoyed everything to do with hunting and fishing. Due to this, the spring, summer and fall seasons would often find him out in Clam Lake helping with the operations of Camp Fire Island Resort. He is mentioned often in Howard’s journal doing various tasks along with his grandson, George (Chip) Taylor. There is a photo dating from around 1915 showing the Island resort with a group of men clustered in the center. Henry is clearly visible standing in the doorway of a building – easily recognizable due to his long white beard. On the morning of the 13th, he set out on foot, from Camp Fire Island resort to go to the Dan Chases hunting camp and died along the way on what was known then as the West Fork Road (Highway 77). He was 72 years old at the time. During this era it was not unusual for people to walk between Clam Lake and Glidden routinely. In his younger years him and his wife Adelaide ran The Chippewa House which was a hotel in Glidden.

Until next week……enjoy the forest and it’s beauty!

Pictured is Chris Frasch’s Snapshot photo of the encounter between elk and coyote. (If you look closely you will see a second elk to the left.)