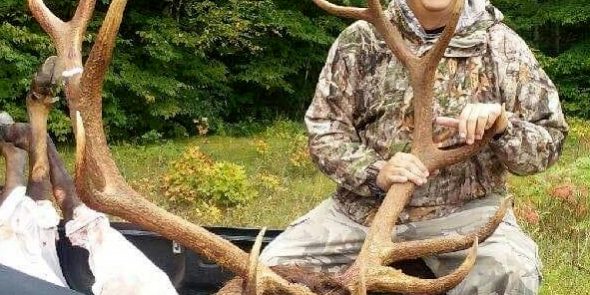 Rain has been the order of the day lately with fluctuating temps. One day the heat is on, the next the A/C – maybe both in one day! Then you know you live up north, right? Gotta love it! Thankfully the weekend cleared (sort of) for all those weekend warriors. The “I Survived the Dead Horse” t-shirts were going like mad. Lots of ATVers around!

With the advent of Fall our Pickleball season has officially ended for the year. We wish to thank Jerry and Colleen Jossart for being our “Pickleball Party Planners” by providing the net, extra paddles, balls, coordinating game days and emailing players about cancelled games or alerting us of games. We also wish to thank our cheerleaders both human, canine and avian. Was a great time with lots of fun! See you next year.

BEARS are the word of the day. Bear season is in full swing with a few of the big bruins being brought in. Gandhi (Randy Sersch) reported that one of his crew got a 380 pounder. Congrats to them! The hunters are frequenting the Clam Lake businesses big time. It’s not unusual to drive by the local watering holes and see a line of trucks as they stop in to take a break from hunting and getting wet.

ELK HUNT: The 2019 Elk hunt has begun for the Native American tribes. The first elk harvested was a 6×6 by Will LaPointe of the St. Croix Chippewa tribe. Congrats to him! Ceremonies at Chippewa Lake will follow the Native American harvest. The season for non-Natives runs through October 12 – November 10th and again from December 12 thru the 20th. Good luck to all those out hunting.

SADLY, on the flip side of our Clam Lake elk hunt, on Saturday morning an elk was illegally shot near the roadside of State Highway 77 and Forest Road 174 in Sawyer County. If you have any info on this please call the DNR at 1-800-847-9367.

The Clam Lake Community Club met for their monthly meeting/Pot Luck/Bingo on Thursday evening. After a delicious meal of homemade goodies we settled in for our monthly Bingo session. We were delighted when both Carnack the Magnificient and Conan the Barbarian made impromptu appearances. There were some lively discussions on barn doors and we learned that Ace is quite adept at multi-tasking – eating brownies and calling Bingo at the same time! We decided to play the infamous “Four Bingos to Win” game with the winner having to call out Bingo four times in rapid succession to be a successful four timer. The password of the moment was “Don’t TELL!!!” in other words was it I-16 or 0-61? Congrats to Brian Eder for winning the door prize and Bev Vadnais for the fill your card prize. When it comes to silly we know, “we’ve got this!”

MIDWESTERN STRANGE: B.J. Hollars, author of Midwestern Strange, sent me an autographed copy of his book which I have been reading. What a fun book! The official title is “Midwestern Strange – Hunting Monsters, Martians and the Weird in Flyover Country”. Clam Lake’s controversial Project ELF is Case # 8. B.J.’s quote to me upon signing was “Lynne, embrace the strange….” I thought….hmmm…I think I can do that! To him, I say, thank you for including us in his project.

RECAP: The Clam Lake Forest Riders held their monthly meat raffle at Ransom’s Place on Saturday and according to member Don Diehls a great time was had by all! Once again Jack and Barb Cook did not disappoint coming out as “leaders of the pack” regarding meat packages. They even won the cake Brenda Kolve made, according to Gail McDonnell! The gang at the meat raffle were happy to have Glidden well represented with them being big winners too.. Don said, “Always nice to have the Glidden boys in the house!” Sounds like a great time!

Pictured is Will LaPointe with his 6×6 elk. Photo courtesy of Rob Stafshollt – State Assemblyman and seasonal Clam Laker.