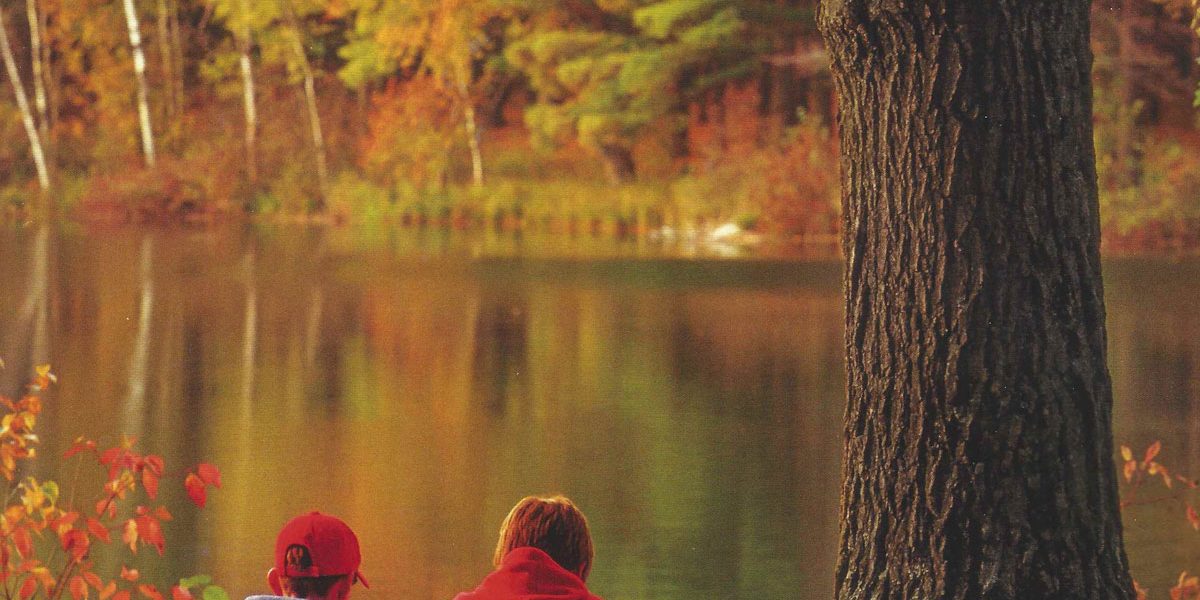 As I round the bend on a forest road, a ghostly form takes shape in the breaking dawn. A large bull elk stands on the shoulder, eating fresh grass sprouting along the road. He’s loading up one energy for a ling hungry winter ahead.

It’s a common sight in the American West…but not in Wisconsin. I’m near the tiny community of Clam Lake and there’s not a mountain in sight. Elk were reintroduced here in 1995, and Clam Lake has fully embraced the animals. Businesses in town have been renamed in their honor.

At the Elkhorn Lodge, Manager Robin Sersch says, “We love having the elk here. They bring many people to town.” Kitchen Manager Bruce Gerow adds, “The best time to look for the big bulls is the first 10 days of October, once the rut is over.”

That’s also prime time to enjoy autumn foliage, of course, so more and more people combine elk watching with their fall color tours. What a magnificent way to enjoy the season!

Here in the heart of the Chequamegon-Nicolet National Forest, there are miles of undeveloped forest land. It’s wild country. Pine martens live here so do bears and bobcats, otters and eagles, wolves and spruce grouse.

Elk Once Common Here
Elk were native to Wisconsin, and once upon a time were common across much of the state. A few years back, scientists from UW-Milwaukee recovered an ancient elk skeleton from a lake bed west of Clam Lake.

The bones of that gigantic bull showed clear indications it had been killed and butchered by indigenous peoples, suggesting that elk were important to our early human inhabitants. Once the area was settled, however, the demise of the elk was almost assured. Settlers cleared the trees and hunted the elk relentlessly. The animals were extirpated from Wisconsin by the late 1800s. A brief reintroduction effort happened in the 1930s, but it didn’t take.

In 1995, a new recovery plan began. UW-Stevens Point, with funding from the Rocky Mountain Elk Foundation, brought 25 elk here from Michigan. Once the population was established, management of the elk was turned over to the Wisconsin DNR.

The Clam Lake herd now has about 165 animals, while the more recently established Black River Falls herd in Jackson County has around 63. This past June, 50 elk from Kentucky were released there, joining 13 remaining from a 2015 release.

Kentucky elk are coming to Clam Lake, too, and are expected to enhance the genetic diversity and boost numbers.

Both herds are growing, albeit slowly. According to DNR deer and elk ecologist Kevin Wallenfang, “Very slow growth is common in most reintroduction regardless of the species. Seems they sort of limp along for several years and then take off.

More Animals to Come
For the next few years, elk numbers and genetics will be bolstered through an agreement with Kentucky to bring 150 more animals to Wisconsin. And today there are more partners in the effort. The U.S. Forest Service and the Great Lakes Indian Fish & Wildlife Commission have joined to help the elk. The Ho-Chunk Tribe and Jackson County Wildlife Fund have contributed.

Given the slow growth, those numbers sound like they’re a long way off, but two relatively mild winters have helped. “We figure about 35 elk calves were born in the Clam Lake herd this year,” Wallenfang says.

From his cabin on Lower Clam Lake, Milwaukee native, Rick Whiting marvels at the size of the elk that inhabit his slice of northern Wisconsin. “What startles you at first is their size,” he says. “But the sound of their bugling is the coolest thing about their addition to the woods.”

That wild call will echo in Wisconsin as these herds continue to grow. It’s a sound that’s growing on residents and autumn visitors alike.