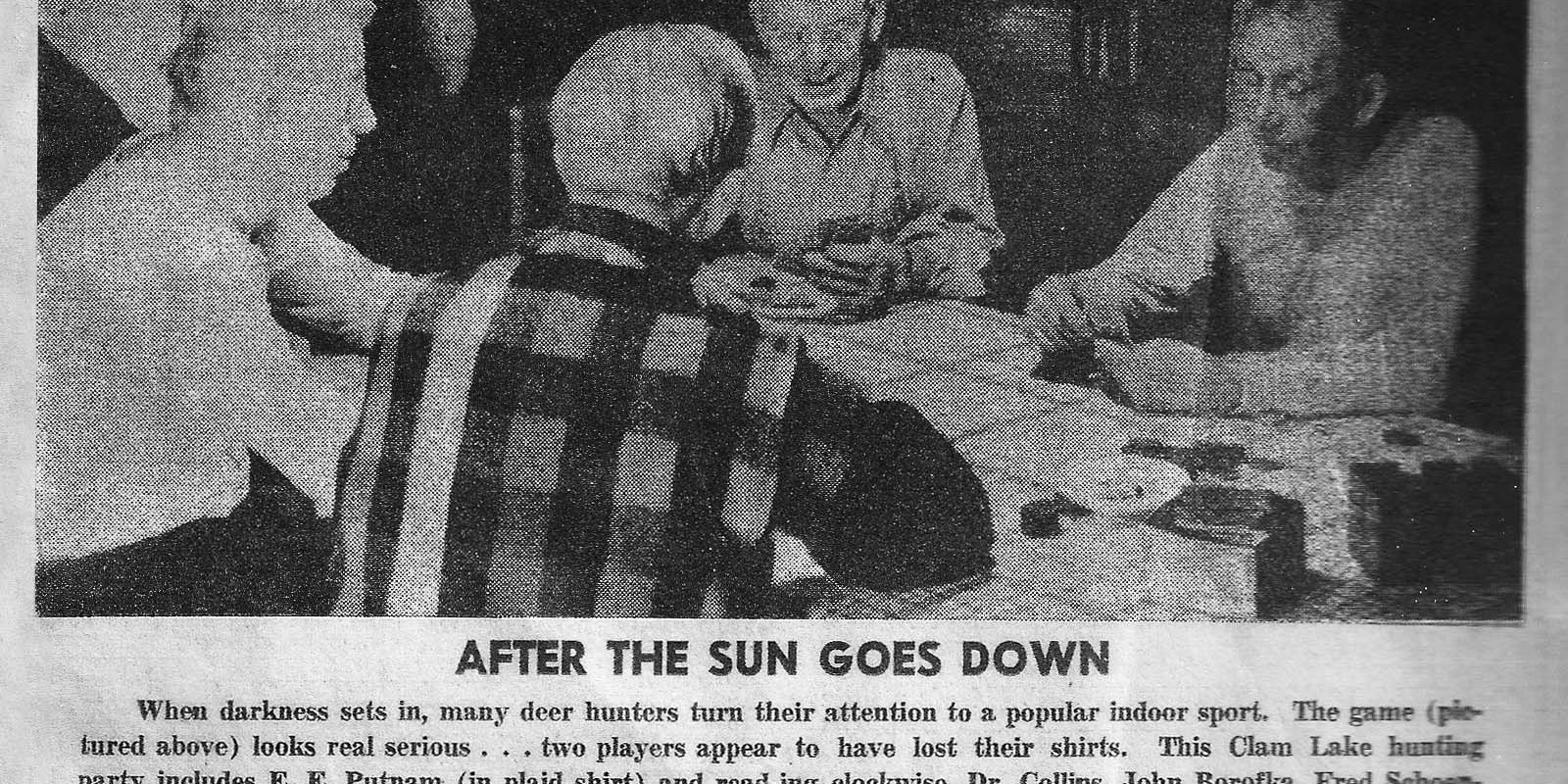 The West Fork Hunting and Fishing Club by Lynne Rice

This ad for Leinenkugels Beer was featured in the Chippewa Falls Herald Telegram in November of 1959. The photo was taken in Clam Lake at the hunting cabin owned by the West Fork Hunting and Fishing Club.

The West Fork Camp is our oldest hunting group still in existence in Clam Lake. It was organized in 1927 by eight men from Chippewa Falls – one of whom was my maternal grandfather, Dr. John Collins. My cousin, Mike Collins, is the current president of the West Fork Camp and also resides in Clam Lake.

The Camp has the distinction of having descendants of the Leinenkugel family as members.

Seeing this picture takes me back to being a little girl who visited the Camp as it would be shored up for another year of deer hunting. The “old camp” was a dug out covered in logs featuring bears and porcupines as frequent visitors. It was a real hunting camp of it’s day and holds many wonderful memories for those that were a part of it. Journals were kept of all the meetings dating from 1927 to the present.

The old camp eventually was torn down with a more modern structure being built. There is still no electricity or running water. All the members work together to keep the Camp running smoothly and gather every year at hunting season to bond once again with nature and each other, in their time honored tradition. Some things time can’t change.

This is their Declaration of Principles stated in 1927:

“Recognizing the love of men for the Great Out-Doors, and the lure of it’s vast wilderness; it’s green fields, bounding Streams and shimmering Lakes, this organization is designed to acquire property and to bring happiness and contentment to the primitive man within us, intended solely to HUNT and FISH in accordance with the existing laws of the community and the ETHICS of true SPORTSMEN; and to protect and perpetuate the Forests and Streams and the denizens therein.”

On any given day, if I see my cousin Mike and ask him what his plans are for the day, he will invariably respond, “I think I’m going to walk into the Camp.” It is what brought us here and keeps us here.

As a side note: Clam Lake has always existed as an ever shifting population of people from here, there and everywhere. Everyone has their own story of how they came to be here – this is mine.