On the 11th of June 2015, a Memorial Stone was unveiled on the Clam Lake Community Club grounds in remembrance of Howard and Hazel Scotford.

Howard and Hazel owned and operated Camp Fire Island Resort, located on Upper Clam Lake, from 1912 to 1936. This was Clam Lake’s first resort and the beginnings of our village and the tourism trade that our community is known for. Camp Fire Island brought many people into the area, that then bought land and built cabins or summer homes. Thus began our multi level community of locals, seasonal people and tourists.

In the days of Camp Fire Island Resort people made their way up to the Island resort via the train. Once here, they were ferried over to the Island. It was early 1900’s adventure at it’s best!

Howard became our First Postmaster in 1928 and was instrumental in running our first store called The West Fork Company. Howard and Hazel were active participants in our Clam Lake Community Club, attending almost every meeting beginning with the first held in 1931. It was then known as the Clam Lake Community Assocation and has always been our civic organization here in Clam Lake. Howard often held positions of importance within the Club, attending his last meeting a few days before his death in September of 1950.

Him and Hazel contributed so much to our small village and it is with great pride that we, at long last, honor them. In placing the stone on the Community Club grounds people can then walk to the shores of Upper Clam from the Club yard and look out to Camp Fire Island where the Island Resort once sat and history was made.

Black granite from the Mellen quarry was used to make the Scotford Memorial. We wish to thank Novitzkes of Park Falls for donating and inscribing the stone. It reads thus:

As a side note: When the old Clam Lake Post Office was bought, the new owners remodeled and in the process found Howard Scotford’s Journal hidden in the attic. The Journal dated from 1912 to 1916 and told us about the early days of Clam Lake. I was fortunate enough to be able to read and write from his Journal. These were the days of big lumber camps and logging trains, and a man with a vision who built an Island resort that started a village. The Journal shared with us a life that was and in so doing made us realize that Howard Scotford was our founder. The rustic stone Memorial is a fitting reminder of that past and the man to whom we owe so much. 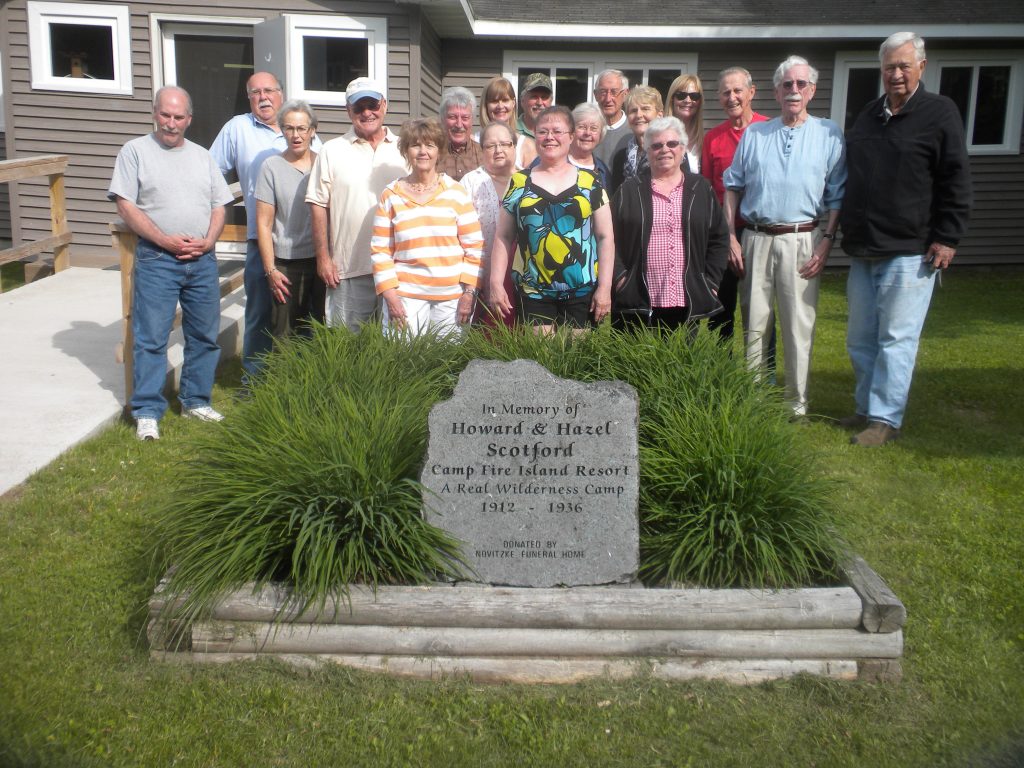