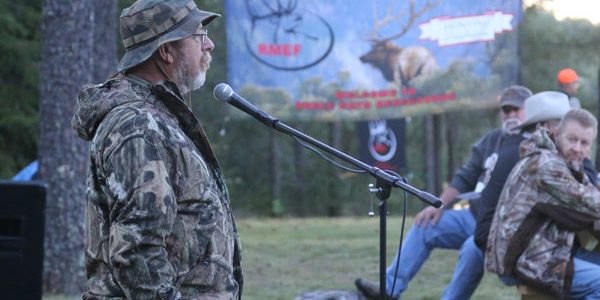 Laine Stowell spoke to more than 70 members of the Wisconsin chapters of the RMEF, who gathered at the U.S. Forest Service Day Lake Campground for a weekend of fundraising, camaraderie and expeditions to look for elk. Attendees also helped put up a fence for an elk quarantine pen southeast of Winter.

Stowell said the Kentucky elk will arrive in Sawyer County next March, and after staying in the quarantine pen in the Flambeau River State Forest, will be released into the forest in early July.

In the past two years, RMEF members helped the DNR create 80 acres of forest openings in the Sawyer County Forest and Flambeau River State Forest, which have been planted with high-quality forage. So when the elk are released from their pen next July, “there will be plenty of good things for them to eat in that area,” Stowell said.

The DNR is looking to trap 50 elk in Kentucky in January, working with partners in that state, Stowell said. Then in the winter of 2017-18, it will catch another 31 elk and in 2018-19 the DNR will catch elk in the Flambeau River State Forest and transport them to the Clam Lake area, he said.

With a lot of timber cutting taking place in the next few years in the Chequamegon-Nicolet National Forest under the collaborative Good Neighbor Authority, “there will be a lot of nice habitat up here for the elk by then,” Stowell said.

Stowell said the Kentucky elk are genetically diverse and are “the best source herd we could get for the restoration of our elk population in Wisconsin. Hopefully we will see an increased growth rate.”

In 2015, there was a “bumper crop” of 38 calves born in the Clam Lake area elk population, and 60 percent of those calves survived, Stowell said. This year, about 35 calves were born.

“Any time we have a nice, mild winter and early spring, we usually see high survivorship of our calves. That should bode well for the herd to grow back from the losses we had in the winter of 2013-14,” he added.

Stowell said that in late June after getting a call from a cabin renter west of Clam Lake, he and wildlife technician Mike Bulgrin rescued a female elk calf that fell into an eight-foot-deep open pit with a drilled well at the bottom. They used a ladder to go into the pit and bring the calf out. They put a radio collar on the calf, and it ran off and appeared healthy.

“That calf is still running around and doing fine,” Stowell said. “That was the only calf we collared this year.” The elk’s mother was nearby and the calf is now hanging around with it, Stowell added.

Stowell said the Snapshot Wisconsin project, which involves 155 trail cameras placed in the forest, “is turning out to be a valuable part of our elk monitoring here at Clam Lake. It’s taken the place of us chasing elk around, catching their calves and putting (radio) collars on them. That has taken some of the heat off the elk and they’re doing better because of it.”

The elk transplanted over the past two years from the Clam Lake area to the forest south of Winter “are doing pretty good,” Stowell added. “The wolves haven’t learned about them yet. It’s been more than two years since an elk down there has been killed by wolves.”

Mike Zeckmeister, DNR Northern Region wildlife supervisor, said, “Elk restoration in Wisconsin would not be where it’s at without the RMEF, Forest Service, the local community and we at the DNR, too.”

Dan Eklund, a biologist with the Chequamegon-Nicolet National Forest (CNNF), said, “None of the things we do on the national forest that pertain to elk can occur without the assistance of folks like you. Our budgets aren’t growing and we’re appreciative of your fundraising and volunteer time.”

Eklund said the Great Divide District does about 150 acres of habitat enhancement each year. That includes mowing 60 to 100 acres along the former Project ELF line corridor, and with the help of RMEF embedding openings within the forest that the elk are using, he said.

“Forest management benefits elk,” Eklund said. This year, the CNNF put out about 110 million board feet of timber for cutting and it will probably be the top national forest in the U.S. for timber this year, he added.

The timber sales include 1,200 acres of storm-blown trees in the Moose Lake area that have been logged over the past eight to 10 months, Eklund said. That “will create open habitat, mostly aspen.”

Eklund said the Forest Service’s Black Torch project stretching from Clam Lake to Loretta-Draper will put another 15,000 acres of aspen habitat back into cutting rotation in the next few years.

RMEF members also announced that the Wisconsin Department of Transportation will offer a Wisconsin Elk license plate, with proceeds going to the RMEF.