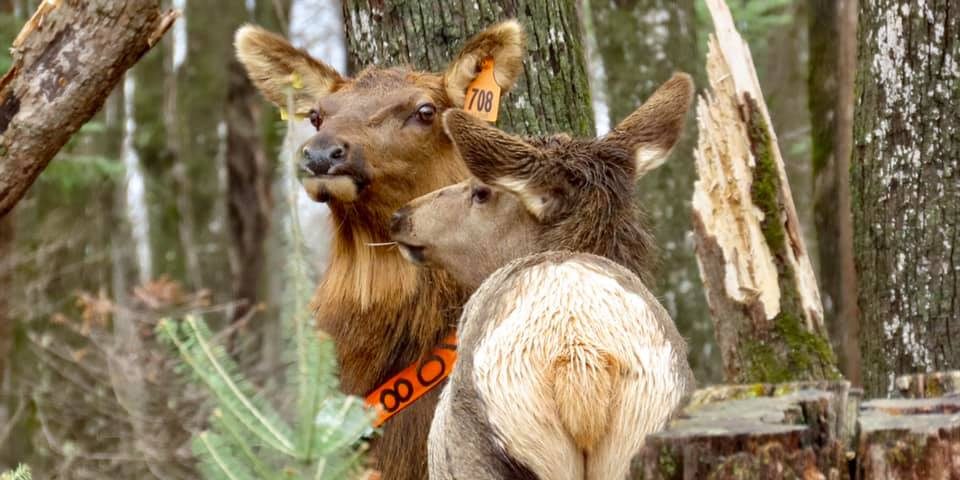 This week saw us back to wintry weather. Chilly days with haphazard snowfalls seemed to be the order of the day. It all melted practically as soon as it fell but, still….enough already. Many of us were out working in our yards in between snow events. Rake in one hand, snow whovel in the other. That’s spring in the northland.

NEW ELK IDENTIFICATION: As reported a few weeks ago, 23 elk from the Flambeau State forest of the Kentucky lineage, were brought to Clam Lake and released during the first week of April. If you are out and about and happen to see some of these “newbies” you can identify them by their collars and number. The transplanted elk have a bright orange collar that has a visible closure in the front. Their number appears in bold black set against the orange background of their collar numbering 600 and above. And, of course, their dead give-a-way is that good ole’ Kentucky drawl. People have been noticing them as they’ve made their way into Clam Lake proper for a bit of a “meet and greet”. So far, they seem to be settling in nicely.

FOREST REOPENING: Our early spring has prompted the Forest Service to reopen the Campgrounds in the Clam Lake area earlier than normal. As of April 29th they will once again be open for business. Good news for all of those that want to get in some early camping. I’ve also been told that both the motorized and non-motorized forest trails were open as of April 24th. Again, due to the earlier than expected forest conditions. Time to get out and enjoy our forest once again!

FISHING SEASON OPENER: The weekend of May 1st marks this year’s fishing season opener. We wish all anglers good luck as they head out with lures in hand to the open waters. I sense some fish fries on the way! Stay safe and have fun!

HISTORY MOMENT: From an April 1941 edition of the Glidden Enterprise: “CCC Entertain on Its 8th Birthday – Neither bad roads nor bad weather stopped the Conservation Corps from celebrating its eighth anniversary last Sunday. Company 653 at Clam Lake Camp put on an interesting program commemorating the event. The Glidden high school band enlivened the occasion with it’s music, while the personnel of the camp entertained the many visitors who had been invited to the Camp to view the accomplishments of the Corps since its establishment and to see how the boys of the Corps are fed, amused and kept in good spirits and health. The Clam Lake Camp had arranged an interesting schedule of events, which included contests at wood sawing, chopping, tug-of-war, a demonstration of the fire fighting equipment and abilities of the youngsters along with free movies, the band concert and a free lunch. The men and their officers are to be complimented on the manner in which they brought to the attention of their visitors the high standards of living, morale and efficiency of the corps as demonstrated by Company 653.” Company 653, of Clam Lake, was located a few miles out of Clam Lake heading towards Glidden. A sign near the road marks where it once was. If you search around a bit, you will find a fireplace that was once in the main office building along with other foundations.

Time to wish all those celebrating birthdays in May a very happy day! They are:

The only couple celebrating a wedding anniversary in May are Ron and Colae Vecchie whom will celebrate their special day on May 28th. Best wishes to them!

Pictured are some of the the new elk out and about. Elk photos courtesy of Kate Brinkman and Jan Sharp. Also pictured is one of the sentinels of the forest – the fireplace of CCC Camp Clam Lake (the 653rd).