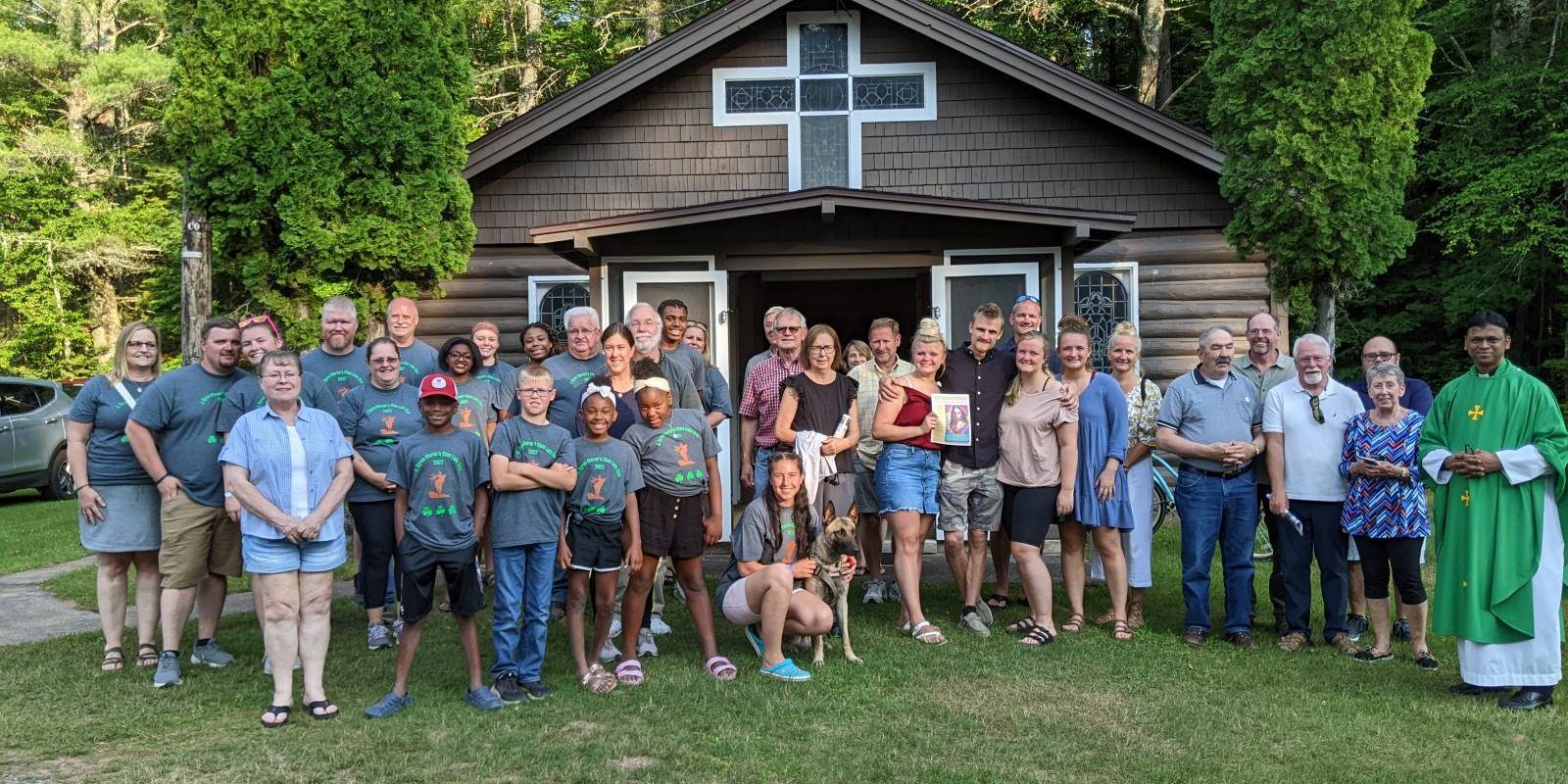 This week saw us experiencing a few days that had a taste of Fall in the air with cooler temps. The days are getting noticeably shorter with a stray orange leaf here and there. The hummingbirds continue to eat and eat and EAT. Suppose they are shoring up for their trek south. Won’t be long now…..

ST. GEORGE: Mass is celebrated every Saturday at 6:00 pm at our historic “Chapel in the Woods”. As you may have noticed, St. George is getting a bit of an outside make-over. The sign (made by woodcarver Jerry Holter in the early 90’s) along with the surrounding plant bed beneath have been removed. The cedar shrubbery, planted many years ago and having been let run wild for decades, needed to be dealt with. Once removed we found large rocks placed all around the base of the sign that were also removed. The sign, too, bore the marks of time and has been taken for restoration. So, we begin with a fresh slate! Only a few masses left before we close for the season so join us and take a step back in time to a simpler era in our log cabin chapel. Come pray with us! (Last Mass will be held on September 3rd.)

MARK THOSE CALENDARS: Over the upcoming Labor Day weekend (September 3rd, 4th and 5th) the Glidden Fair will be held. The Glidden Areal Historical Society history building will be open during those days from 10:00 am till 5:00 pm. Clam Lake and Glidden’s histories have always been intertwined with our founder, Howard Scotford, traveling out to the West Fork area after first locating in Glidden. He married into the Taylor family which then brought the Deringers and many other Gliddenites to the Clam Lake area. Most of Clam Lake’s children have attended school in Glidden over the years binding the two communities together. Fittingly, the Clam Lake exhibit is housed in the Glidden Area Museum. Along with the exhibit, there are many things kept in the Museum which pertain to Clam Lake or have come from Clam Lake. So come and enjoy the sights and sounds of the Fair, held at historic Marion Park, and take a trip into the past while there.

SYMPATHIES: We extend our sympathies to Wanda Lallier and family on the loss of Jeff (Knob) Lallier. Knob was a well known seasonal Clam Laker whom enjoyed every aspect of the great outdoors. He was an avid deer and bear hunter. Knob began coming to the Clam Lake area in the mid 80’s. Feeling right at home in the forest setting he decided to purchase some land and build a cabin. One of his favorite pastimes was sailing, particularly ice boat racing which he participated in with his brother, Dave, thus becoming a lifelong lake Winnebago Stern Steerer sailor. Together they also purchased and refurbished antique ice boats such as the historic Flying Dutchman ice yacht. He also sailed Renegades. Along with sailing on the frozen ice, he enjoyed sailing on open water and often took part in the sailboat races held on Spider Lake. He was a devoted family man, whom loved spending time with his family, and will definitely be missed! Knob was 62.

Pictured is a group of parishioners after a summer service at St. George in Clam Lake. (Photo courtesy of Father Royan.)