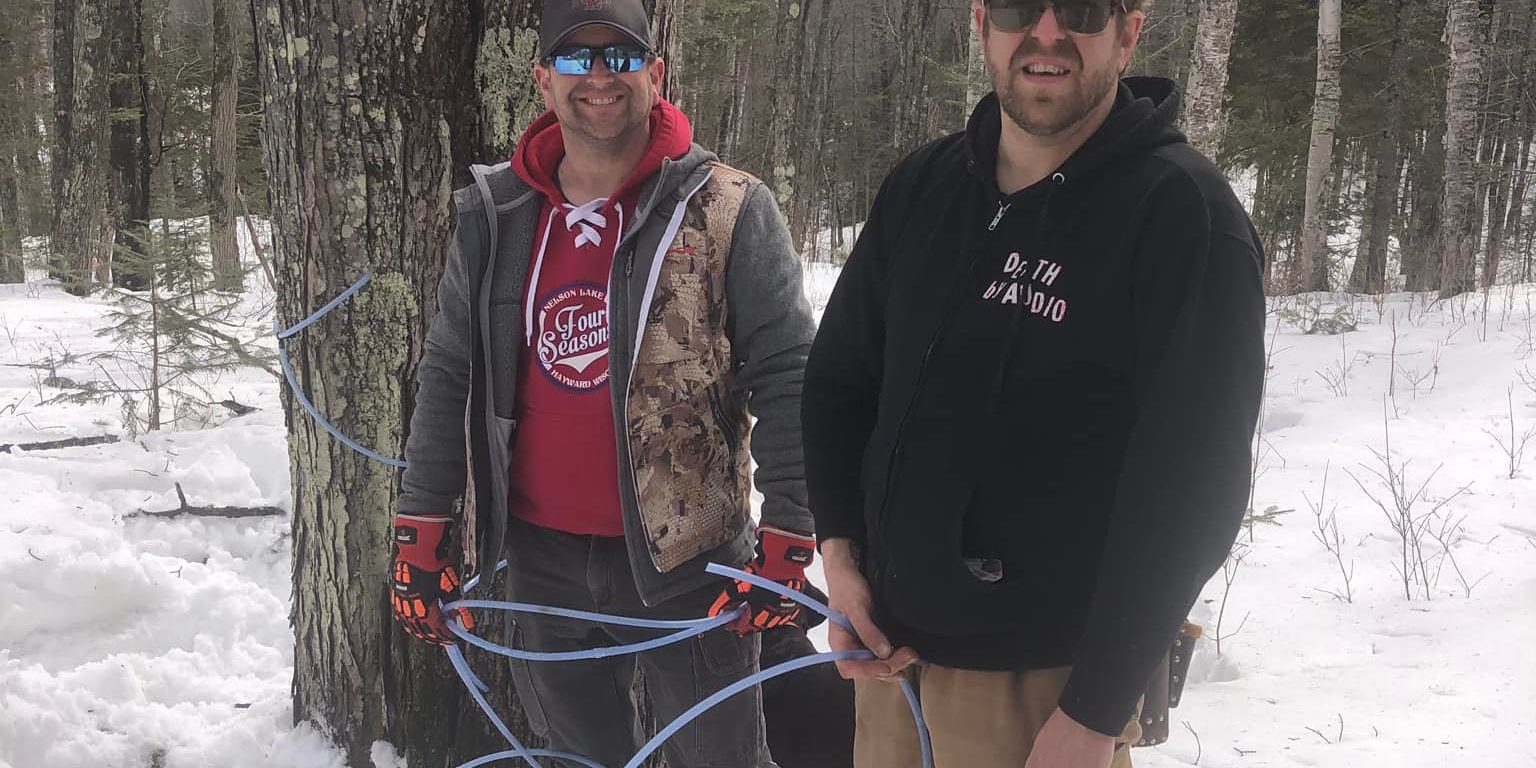 Spring has definitely been in the air as we went from mornings of -10 to days in the upper 40’s and lower 50’s. Along with the welcome sights and sounds of winter melting, the road bans have gone on. A sure sign of spring in the northland! Still a few snowmobilers around but, I think their days are numbered. Time to pack up those sleds for another year and think spring!

SUGARING SEASON: Another sign of spring in the forest is the onset of maple sugaring by various groups of industrious folks whom find pleasure in using what Mother Nature has provided to make their own maple syrup. When the days warm and the nights stay cool, so begins the best time to tap trees to collect the sap that has lain dormant and frozen all winter. Once the tree thaws gases build up inside causing the sap to be pushed out through buds or injuries (such as a broken branch or a tree tap) causing what is termed a “run”. This is the time to tap a tree to collect it’s sap. Once the sap is collected the boiling down can start with a percentage of, on the average, 40 gallons of sap to one gallon of syrup – a very labor intensive task. In our “neck of the woods” the Biasi family are one such “industrious group” that enjoy tapping their maple trees and making syrup. Tom Biasi reported that for his small family operation it takes lots of firewood, about 100 hours of labor and 70 gallons of sap to get one gallon of syrup. They end up with about 2 gallons of homemade syrup that they split five ways. Tom said, for them, it is all about the camaraderie and family tradition. How nice is that? Good job!

UPCOMING EVENT – SPRING FLING POTLUCK: On Saturday, April 9th, a group of Clam Lakers are hosting a Spring Fling Potluck at the Clam Lake Community beginning at 2:00 pm. Bring a dish to share and your own favored beverage. Games will be provided with people encouraged to bring a fun game of their own if they have one. This will be an opportunity to get out and meet and enjoy the company of new and old neighbors. All are welcome to attend!

CAMP FIRE ISLAND EAGLE UPDATE: Folks on the “mainland” have been keeping a close eye on Camp Fire Island’s resident eagles. Earlier in the season, it was unclear if there would be eagles using the nest this season but, a happy couple did find their way to our island to settle in and set up housekeeping. Rick Hinchcliff has reported noticing the momma eagle turning her eggs, so a new set of eagles are on their way. Happy news! We wish them well.

HISTORY MOMENT: Ted and Hilda Lehmusvirta were a couple from Finland who lived at the Clam Lake Forestry Station during the 1950’s. Ted was a fireman in the construction and maintenance division of the Forestry department. He worked in Clam Lake, then later in Glidden and Park Falls. Hilda was a wonderful cook whom enjoyed sharing her famous kuchen with the community. This excerpt was taken from a Glidden Enterprise of 1952: “Clam Lake Elects Officers – The annual meeting and election of directors and officers of the Clam Lake Community Club, Inc. was held last Friday at the Community Building, with vice-president Theodore Lehmusvirta presiding in the absence of president, Robert Feeney. The Board of Directors elected were: Resident – Fred Kasdorf (Hemlock Tavern – later Snug Harbor), Theodore Lehmesvirta (Forestry Station), Harold Beimel (Clam Lake Store), Walter Stuebe, Harry Anderson and Pat Canfield. Non-resident directors: Mrs. Barbara Bushnell of Omaha Nebraska and Alfred J. Stuebe of Milwaukee. Those elected as officers are: Mrs. Joseph Stepanek (Betty) President, Theodore Lehmusvirta Vice President, Mrs. Henry Zillig (Mamie – Pinehurst Resort) Secretary and Mrs. Clarence Stuebe (Virginia) Treasurer. The meeting was opened with a pleasant surprise for Mr. and Mrs. Lehmusvirta whom were celebrating their twenty-fifth wedding anniversary on that day. Fred Kasdorf, chariman of the board of directors, presented them with a corsage and boutonniere with sliver ribbons and a gift from the members.” To facilitate work at remote sites, the Forest Service built guard stations at strategic locations throughout the forest to house fire personnel and equipment. As technology improved, they became obsolete with many being abandoned in the 1990’s. Many families lived at the Clam Lake Guard Station over the years. The last person to occupy the living quarters was Charlie Hester of the US Forest Service.

Pictured are Tony and Pete Biasi carrying on the Biasi family tradition.