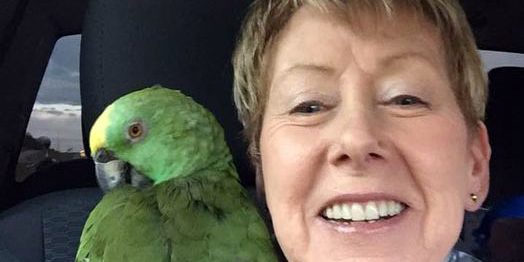 Well our weather returned to more seasonable moments with a bit of snow and cooler temps. Not a lot of sun this past week either. What bits of new snow we received melted by the end of the week, so aside from the leftover snow banks things are looking pretty bare. All good! Winter is on it’s way out!

SYMPATHIES go out to the Filter family on the loss of Aunt Bonnie. Kim related that she was the last on that side of the family and will be sorely missed. Always hard to see an end of an era.

CONDOLENCES go out to Bob and Cindy Buryanek on the loss of their beloved parrot Bozo. Bozo was a yellow nape Amazon parrot whom was with Bob and Cindy for 35 years! The Buryaneks summer in Clam Lake and winter in Texas. Bozo made the trek back and forth happily perched on Cindy’s right shoulder. In her time Bozo logged in over 20,000 miles in her travels with the Buryaneks. She loved coming north to her Clam Lake home and seeing the occasional wayward turkey in her yard for whom she would strut and preen. She also enjoyed seeing children from the Bible camp out on the lake to whom she’d called out a hearty “Hello!”. Cindy referred to her as her “watch bird” since she would alert her of any type of critter in the yard. Along with talking, Bozo was also known for her singing. “Rock a bye Bozo” was a favorite. Many of us in Clam had the pleasure of meeting Bozo if she made an unscheduled visit to town. She was quite the lady and will be missed by one and all!

HISTORY MOMENT: Taken from a March 1926 edition of the Glidden Enterprise: “A site has been purchased on Upper Clam Lake for a club which will be known as the Shangolden Club. This is an organization of sportsmen from the Southern part of the state and the grounds will be improved this summer and a large clubhouse will be built next year with logs which will be gotten out next winter. H.A.Scotford made the sale.”(H.A.Scotord was the owner and operator of Camp Fire Island Resort on Upper Clam Lake at that time and sold real estate for the Hines Lumber Company and others. He was also a “mover and shaker” of his time always promoting the village of Clam Lake by encouraging various business ventures. No mention has been found of what became of this club There is no evidence it was ever built or became operational.)

MILITARY HISTORY REMEMBRANCE: Glidden Enterprise March 1945 – “Roger McCorison came Thursday for a day’s visit here and at Clam Lake. He had been at sea 18 months and engaged in seven major sea battles. He has been in all of the major engagements from the Gilbert Islands until the Phillipines. He is visiting with his mother whom had been employed in Chicago.” (The McCorison family were the first to run The Clam Lake Lodge on Upper Clam Lake. They purchased it in 1937 from L.L.Barth whom was part owner and Vice President of the Hines Lumber Co.)

Time to wish all those celebrating birthdays in April a Happy Birthday. They are:

The only couple celebrating a wedding anniversary in April are Ralph and Cheri Cornell on April 29th We wish them a very happy day!!!

Pictured is Cindy Buryanek and Bozo enroute to Clam Lake.