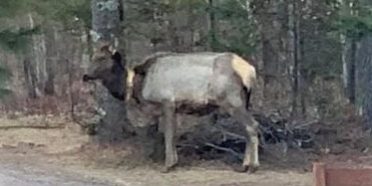 The word on this past week’s weather front was WIND!!! The beginning of the week saw what seemed like gale force! Temps also dipped for a night or two with lows in the teens. Even with that, he ice has lost it’s grip on the lakes and the woods are reappearing as the snow, aside from clumps here and there, has disappeared. Even the spring mud is becoming a thing of the past. Ahh…the joys of an early spring!

EMILY THE ELK – A TRIBUTE: Many of us living in Clam Lake noticed cow #162, whom was lovingly named Emily. Emily was born in May of 2005 so would have turned 16 next month. The distinguishing feature about Emily was that she was lame. Back in 2010 she was nicked by a car which left her right back leg damaged. At first, as will happen with injured wild animals, she was cast out of her group. Taking this in stride, Emily decided, upon the birth of her subsequent calves, that she would form her own group. And she did! At the time of her passing, eleven years later, she had become the matriarch of what Josh Spiegel (wildlife/elk biolgist) termed the “odds and ends” group. From living life as a spurned member of the elk herd she became the ring leader of her own herd. She was accepted by the winter groups whom tend to be larger and produced calves every year. Josh said she was a very good mother and was overall, aside from her injury, a healthy elk having learned to live and succeed with her disability. As for location, she tended to hang around the village of Clam Lake proper with her group. We are proud of how she surmounted the adversity life presented her with so, it is with heavy heart, that I report of Emily’s passing of natural causes on Easter Sunday. She was discovered off of Parker Road which was a favorite haunt. Here’s to a life well lived!

EAGLETS ON THE WAY: Jan Sharp, our local birder, reported that Camp Fire Island’s resident eagles are once again sitting on their nest in preparation for the arrival of (hopefully!) a pair of young eaglets. We wish the happy couple success as they once again take on the task of parenthood. Jan also reported the return of many migrant waterfowl species such as Common Megansers, Canada Geese, Hooded Megansers and even a couple Mallards. We say – Welcome Back!!

WISCONSIN OUTDOOR NEWS reported: “A man has been charged for the 2018 shooting of a Jackson County cow elk during deer season of that year. This person is 36 year old Jesse Hafenstein of Columbus. The DNR received an anonymous call from a person identifying the subject who shot and killed the elk. The informant provided the name of the person who shot the elk, when the elk was shot and said the wardens could identify Hafenstein because he’d made a report to the Jackson County Sheriff’s Department several days before the elk was killed to report he’d lost his deer rifle. Members of the hunting party Hafenstein was with heard four shots and upon exiting the woods noted that a cow elk was down and not moving around 30 to 40 yards from where Hafenstein had been standing for the deer drive. Members of Hafenstein’s hunting party urged him to report the killing of the elk but he refused and told them he was going back home. If convicted, Hafenstein faces not less than $1,000 or more than $15,000 in fines and penalties, and no more than six months in the county jail. He will be prohibited from obtaining hunting, fishing or trapping licenses for five years.”

HISTORY MOMENT: From a Glidden Engerprise dated April of 1919 – “Circuit court is in session this week and several Glidden citizens are enjoying a vacation as jurymen. John Eisch, H.A.Scotford (owner and operator of Camp Fire Island Resort Clam Lake), Albert Wiedenhoeft and F.X.C.Hannes went up Tuesday for this purpose. The latter were named and John Aikins and Mike Schraufnagel, who were also drawn were excused. A noteworthy fact in connection with the calendar is that not a divorce case from Ashland county or any county in the district is noted for trial.”

Pictured is Emily the Elk – photo courtesy of Tammy Pederson of Parker Road.