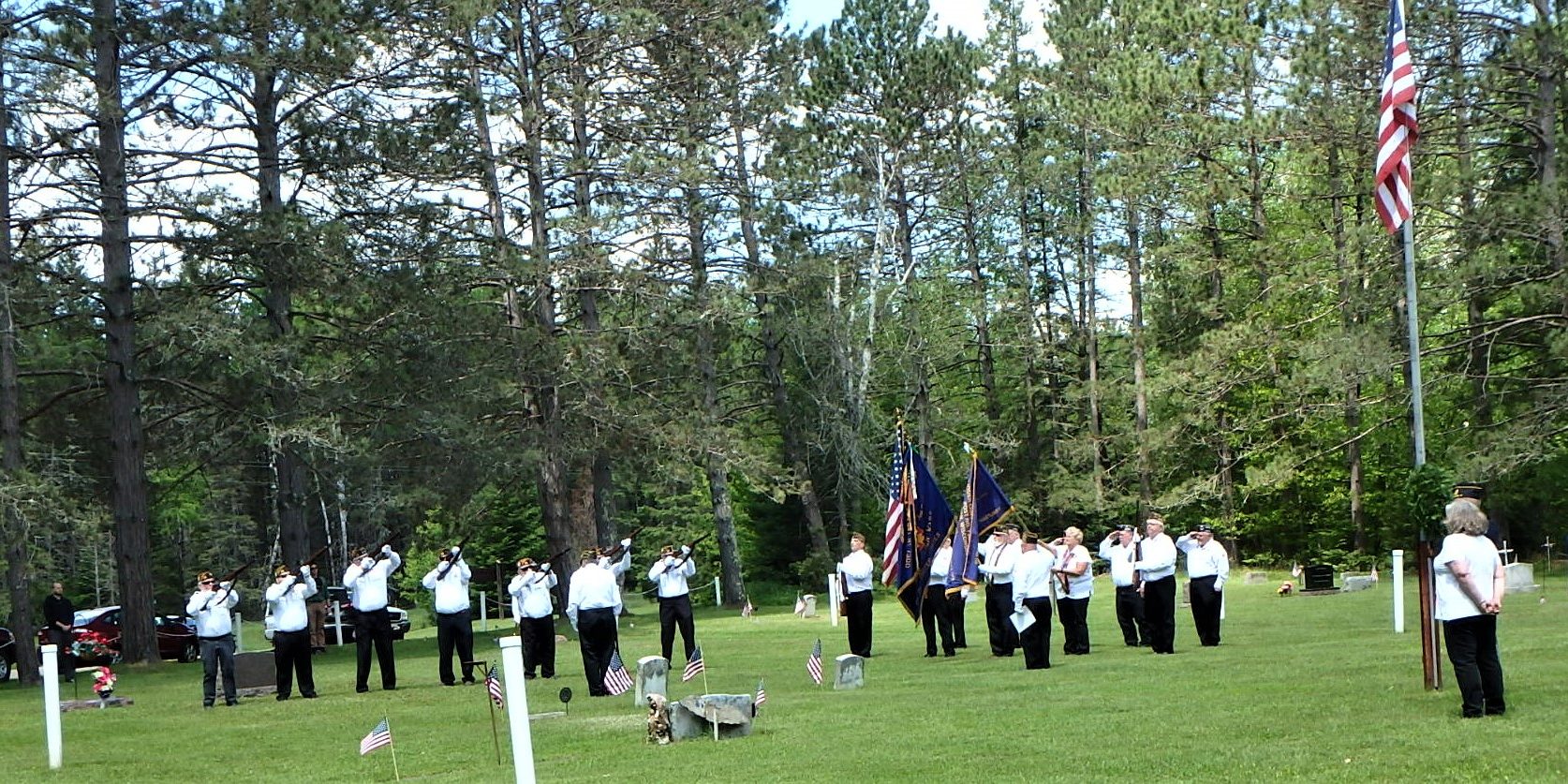 We are still experiencing a day or two of summer like weather, followed by a day or two of winter like temps complete with frost. One day it’s shorts and flip flops, the next jeans and sweatshirts. And so it goes….

A MEMORIAL DAY THANK YOU goes to out to the Glidden VFW for visiting our village once again to honor those that have served. The ceremonial throwing of the wreath was held at the river honoring those that have served on the water followed by an honor salute at the Clam Lake Cemetery. A special thank you goes out to Ralph and Sheri Cornell of the The Chippewa Tavern for hosting a lunch for the veterans following the cermonies. This special luncheon was begun in the 1970’s by Ray and Evy Swaggerty. Ralph told me when he and Sheri bought the tavern he thought it was a wonderful idea that he wanted to carry on. And he has for the past 41 years! only missing two years. Once, in 1989, when The Chippewa burned down and then again last year when the pandemic prevented such activities. Thank you! Thank you! To one and all!

THE HUMMERS are back in force, as are the bears. Time to bring those hummingbird feeders in for the night before damage can be done. Once the bears have more natural food available to them they should settle down. But, for now…..they’ll take what they can get and make a mess of it in the process.

COMMUNTIY MEETING: On Thursday, June 10th at 3:00 pm at the Clam Lake Community Club there will be an informational meeting about the community’s 4th of July celebration. Anyone wishing to listen or help with this event is welcome to attend. Hope to see you there!

ST. GEORGE’S CHAPEL: St. George’s Chapel is once again open for the summer season. Masses are said every Saturday at 6:00 pm. We invite all to come pray with us in our historic log cabin “Chapel in the Woods”. Take a trip back in time to a simpler day and age as you worship in our chapel made from the forest that surrounds it.

ELK UPDATE: I spoke with Josh Spiegel, our wildlife/elk biologist, to see how the newly transplanted elk from the Flambeau are adjusting to their new home. He reported that a handful have remained right around Clam Lake proper mainly in the Day Lake area. Another group have headed north towards the Mineral and English Lake regions. This, said Josh, is good news as those areas had not previously been settled into by the elk. Is great to see them branching out using more of the habitat available to them. And, just to show the two sides of the “elk coin”, he pointed out that while one elk has gone rogue traveling 24 miles up towards Ashland, another hasn’t wandered more than a yard or two from the release site. He also was glad to report that this year’s calves are starting to make their appearance. Good news!

CLAM LAKE COMMUNITY SCHOLARSHIP – 20 YEARS OF GIVING: This year marks the 20th anniversary of the Clam Lake Community Scholarship. With that said, as the Scholarship’s Chairperson, I wish to thank all those that have contributed to our scholarship over the years and to the committee members, both past and present, that have helped keep it going. Without them, this wouldn’t have been possible. Thanks go out to: Dodo Dumanch, Jerry Justice, Jane Eder, Georgianna Fanella and our newest committee members – Jan Sharp and Beth Allison. In honor of our 20th anniversary it has been decided, by our committee, to award scholarships to both of the students whom applied for our scholarship this year. They are Madison Mertig, daughter of Don and Shannon Mertig and Dustin Hagmann, son of Trisha Hagmann. Both graduates are from the Chequamegon School Districk and reside in Glidden. We wish them both success in their future endeavors in the field of their choice. As to us, we look forward to continuing to help young people achieve their goals. Contratulations Clam Lake on a job well done!

HISTORY MOMENT: From a May 1940 edition of the Glidden Enterprise: At a meeting held at the Clam Lake Community Club the subject of deer sightings was brought up by a gentelmean attending from Sanborn. He had counted 11 deer on the course of this auto trip from Sanborn to Clam Lake. It was noted that: “Mr. Stuebe, president of the club, had counted 144 deer in a single day recently, and others had counted upwards of 100, during the period in which the rye along the highway right of way was attracting deer to feed.” Lots of deer!!!!

Pictured is the Glidden VFW observing Memorial Day in Clam Lake and at The Chippewa Tavern with hosts Ralph and Sheri Cornell.