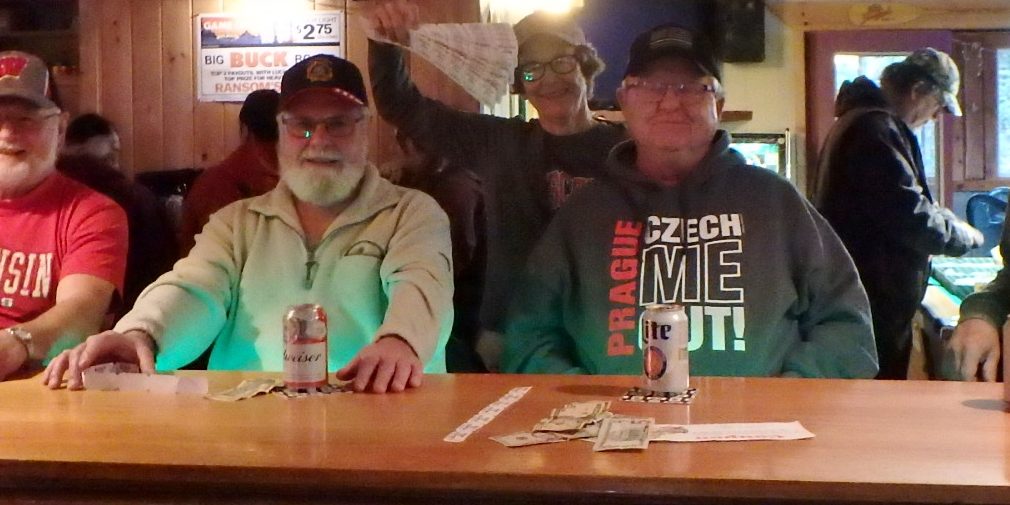 We had a bit of snow this week – just enough to remind us of what is to come. Thankfully, we had a few sunny days amidst the clouds. Winter is definitely in the air. Once again it’s time to suit up when venturing outside. On go the boots, jackets, hats, gloves, etc, etc, etc. Before we know it, we’ll be hearing the hum of snowmobiles.

The village continues to be busy with bough season and a few ATVers. Vehicles loaded down with boughs zipping in and out are the norm. Always fun to reconnect with people we only see this time of year. The bough cutters do a fair amount of business in town between gas and snacks and we welcome them.

DEER RIFLE SEASON will be upon us in a couple weeks. This year the hunt runs from November 23rd through December 1st – six days later than last year. This has traditionally been a very busy season for the village as hunters frequent the businesses for licenses, supplies and camaraderie.

REMINDER: The Clam Lake Community Club will be holding their monthly Meeting/Pot Luck/Bingo starting at five on Thursday November 14th . Adrian Wydeven, retired wolf biologist, will be our featured speaker. Adrian has 33 years of experience as a wildlife ecologist under his belt and is the former coordinator of the Timber Wolf Alliance. If you want to learn more about the wolves in our area, this is the place to be!

UPDATE – JERRY’S LEG CRAMPS: I spoke with Jerry Jossart this week inquiring after his leg cramps that were featured in an earlier column. I am happy to report that they are much improved due to the wearing of a brace. Some new aggravation had occurred due to Pickleball and shoveling dirt. Onward and upward!

RECAP: The Glidden Boys were definitely “in the house” at the Forest Riders Meat Raffle for charity this past Saturday. John Liesenfelder (Dump Road) started off the evening winning the first package of meat. To his credit, John kept buying tickets and kept winning. He concluded the afternoon by winning four times! – making him the top winner. Other big winners were Gail McDonnell (three times) and Dave Frasch (three times). Thanks go out to all the participants! The proceeds will be donated to the Brick and Second Street Market Holiday Dinners which provide food and meals to needy families in the area.Was an afternoon of popcorn (George Lutz – thanks for sharing) and fun! Next month’s raffle will be on December 7th with Spud BeBeau providing a Christmas tree to raffle off. See you there!!!! (Side note: The Glidden Boys that were in attendance are all Vets – we thank them for their service!)

FLASHBACK: Last week, Project ELF was once again at the forefront in Clam, as three college students from Michiagn Tech ventured down to do a documentary on our once controversial installation. Whenever I think ELF is a thing of the past I am reminded that interest still runs high about what it was, where it was and the impact it played on our lives.I contacted Tom Biasi, former ELF employee, and before I knew it we were headed back to what remains of Project ELF so Tom could give them a “guided tour”. I must admit, it is much easier to get into ELF now than back in the day. Hard to believe when one travels down the still black topped road and comes to a gate that once prohibited people from entering, that this is where it all was. A massive open field is what remains with a few storage buildings off to the left that are owned and used by the Forestry. If you look at overhead aerial shots of the former site you can still still the lines where grids once ran. They concluded their filming by having a bit of fun as one of their group laid down under the gate referencing back to the days when protesters frequented the area. This will be available to watch on YouTube at a later date. I’ll keep you posted.

Thanks go out to all the Veterans that have served our country to keep us safe!

Pictured are: The Glidden (Boys) Veterans along with their nicknames: George (I christen him Popcorn) Lutz, Dennis (Not So) Sharp, Gary (Fence Post) Eder and John (Dump Road) Lisenfelder at the Meat Raffle.