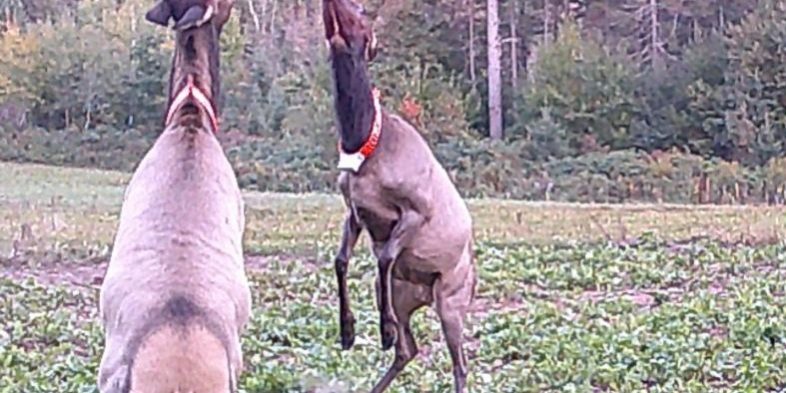 Our weather this past week went from wearing shorts one day to frost and a few stray snow flakes a couple days later. Fall was definitely in the air and on the trees. Of course, once our colors peak, Mother Nature decides to send some wind to blow those leaves and pine needles around. It sure has been a beautiful fall so far!

MEETING REMINDER: The Clam Lake Community Club will be holding their monthly meeting on Thursday, October 13th beginning at 5:00 pm. After the short meeting there will be a Pot Luck followed by some Clam Lake Style Bingo led by Master Bingo Caller Ace Griffaw. Hope to see you there!

FAMILY TIME: Kish Hodgeman was happy to report that her brother Mark Fowler and his wife Alexis were visiting from Canal Fulton, Ohio. The two went on a trip up around Michigan and down into Wisconsin stopping along the way to visit with Kish and Fred. Kish wished to send out Happy Birthday greetings to Alexis whose special day will be October 31st. Happy Birthday Alexis! From all accounts a good time was had by all!

WANNA DANCE OR ATTITUDE PROBLEMS? My photo of the week seems to be asking that very question as two cow elk are caught facing off from one another on their hind legs. I spoke with elk biologist Josh Spiegel as to the why of this behavior. He said that, although cows do not spar during mating season like bulls, they will have “fights” to determine dominance. Within an elk group there is always a dominate female. This aggressive behavior can also simply express displeasure at one cow’s behavior towards another. A simple “I just don’t like you today!” attitude going on. Apparently the joy of dancing doesn’t factor in at all. Oh well….

SPEAKING OF: The first leg of the 2022 Elk hunt will get underway on Saturday October 15th running through November 13th. The second half will take place December 8th through the 16th. Of the eight tags allotted, 3 have been awarded to state hunters with one raffled off by the Rocky Mountain Elk Foundation. The remaining four tags go to the Ojibwe tribes per their treaty rights within the Ceded Territory. All participants must be Wisconsin residents.

A SPIRITUAL HUNT: I had a chance to speak with Charlie Rasmussen, the Director of Communications for (GLIFWC) the Great Lakes Indian Fish and Wildlife Commission about the Native approach to the elk hunt. For them, it is a ceremonial hunt. Unlike most hunters, the Natives believe that the first legal bull you see is the one that is being provided by the Creator and should be taken regardless of antler size. Once the meat is harvested, the remains are buried in the traditional manner. Prior to the hunt, participants gather at Chippewa Lake where their Elk Camp is set up and the ceremonies are held with the drum and pipe. Officials from the three different branches of the Native elk hunt are represented at Elk Camp providing instruction. These being: the spiritual (in the form of a spiritual leader), conservation (warden) and biology (biologist). All rules regarding the elk hunt are explained at this time and ceremonies asking for a good hunt are held. Tobacco is smoked in the pipe with it’s smoke drifting upwards so the prayers held within the smoke are sent to the Creator. Tobacco is one of the four sacred plants and is offered as an act of reciprocity for the elk being provided. Tobacco will also be spread near the elk thanking it for what it has given. All meat is shared within the Native communities with a Community Feast being held so all can participate. Meat is also given to local food banks. The elk hide will be used by drummers whom value it greatly. The two main themes of the Native elk hunt are spirituality and sharing. What a great tribute to our elk!

CHECKING IN: Last week I was visited by my local elk neighbors a few times as they spent some quality time out wading and swimming in front of my home. Periodically they stop by to see how things are going in the deep, deep woods. While here, they paused for a few minutes to check out what was on TV and to make sure all was well. Nice of them to stop by!