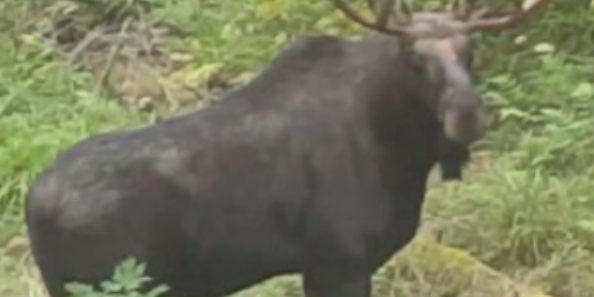 It was back to summer this week with days in the high 70’s. Humidity was also on hand with rain coming and going. Was great to have the windows open again. Weeks like this are always a bonus this time of year. We’ll take it!

CONGRATULATIONS go out to Justin and Alana Gerhardt of Quincy Il upon the birth of their daughter Emerson Anne. Emerson is the granddaughter of seasonal Clam Lakers Ron and Colae Vecchie. She is welcomed home by her big brother Hudson.

MOOSE ON THE LOOSE: On Wednesday the 18th Don Fogal and Lee Nelson, road crew for the Town Of Spider Lake, were heading down Mathey Road to inspect a culvert that needed replacing when they saw something alongside the road. That something turned out to be a young bull moose. It proceeded to walk down an embankment so Don got out of the truck and took some pictures and a video. He said it was not overly frightened – a bit more timid than an elk, but less so than a deer. The pictures I will share Don took while standing on top of the embankment looking down at the moose and a still shot from his video. He said it was an experience he’ll never forget! Wow! Is all I can say. Lucky guy! Talk about being at the right place at the right time. As a side note: This big boy has been spotted in a few areas since his Clam Lake visit. He even stopped for a quick photo op near Joanna Burditt’s farm in Sanborn. (Joanna works at the Clam Lake Junction and is a photographer.) He’s a man on the move!

HAPPY BIRTHDAY to all those celebrating birthdays in October. I hope everyone on the list has a great day!!

HAPPY ANNIVERSARY wishes go out to these couples whom are celebrating their special day in October. They are:

HISTORY MOMENTS: September marks the anniversary of the loss of one of our village’s original landmarks. On the night of September 29th, 1989 (30 years ago) a car that caught on fire hit the Chippewa Tavern burning it to the ground. It was rebuilt a year later by owners Ralph and Sheri Cornell. The Cornells moved here in 1981 buying the business from Ray and Evy Swaggerty. The Chippewa was the first tavern in the village and in it’s early days not only served liquor and food but also rented out rooms above. It was formerly established in 1932. Thankfully, the Cornells were able to save the old back bar and cash register so some of it’s “days gone by” aura is still visible. The Chippewa saw many reincarnations over it’s years of existence from being a tavern and hotel to a place of music and dance when the Swagmen (Ray Swaggerty’s band) reigned supreme to now being a home for Chicago style pizza. It was the setting for Clam Lake’s first mailtime coffee clutch and a place for Project ELF employees to stop after a day at the site. If only that old back bar could talk – what stories it could tell!

Until next week…..watch out for wayward moose!

Pictured are Don Fogal’s pictures of Clam Lake’s recent visitor. Thanks to him and Frank Zufall, of the Sawyer County Record, for sharing them with me.