Clam Lake and the Wannigans 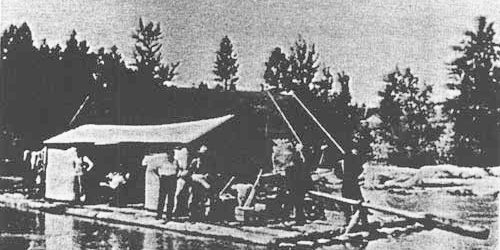 In affiliation with my writings on Camp Fire Island, I had the good fortune to become acquainted with Kim Potaracke, a Forest Archaeologist. She has archived the story of Camp Fire Island for us. She, in return, shared some early Clam Lake history with me that she had found.

This is a document dated January 20th, 1937 and is from the Library of Congress from the personal narrative of W. G. Leonard. Mr. Leonard worked for the Weyerhauser Lumber Company and managed log drives for them.

“When the logging roads were sufficiently rutted and iced, the logs were loaded on sleighs and taken to the river or lake landings to be piled on roadways. Following the break-up of ice in the lakes and rivers, and when sufficient water was in the dams the “drive” would start.

The camps and independent loggers inland along the tributaries of the main waterways would blast and “peavy” the logs from the rollways into the water and drive to the main lake or stream. Upon reaching Clam Lake or the West Fork of the Chippewa River, all logs were turned over to the Chippewa Lumber & Boom Company’s (original Weyerhauser Company) “corporation drive”.

The corporative drive on the west fork covered about 160 miles from Clam Lake to Flambeau farm. From this point many logs went on rafts to LaCrosse, Wisconsin; Winona Minnesota; Clinton and Dubuque, Iowa. At Clam Lake the “Wannigans” were constructed from lumber “whip-sawed” from logs on the spot. Whip-sawing was a process in which the logs were placed on a frame erected on sunken posts high enough to allow a man to saw from a standing position below; and sawed to desired specifications by hand. The “Wannigans” were the boats used to carry equipment. There was the “Cook Wannigan” and the “Tent Wannigan”, each about 18 feet wide by 60 feet long. The “Cook Wannigan” was equipped with two large cooking ranges and portable tables and benches, as well as food supplies. Five meals a day were served, breakfast at 5 a.m., first lunch at 10 a.m., dinner at 12 noon, second lunch at 3 p.m., and dinner at 6 p.m.. The “Tent Wannigan” carried the tents, blankets, and other personal effects of the men. Each “Wannigan” was handled by two men, one at a large sweep in front and the other at a similar sweep in the stern. Of necessity these men were very able rivermen. The “Wannigans” followed the drive to its destination and then, their usefulness over for that year were turned loose to drift down stream. Many of these corporation-drive “Wannigans” could be recognized on the Mississippi below St. Louis in use as house-boats enroute to New Orleans. When there was sufficient wind at Clam Lake, the drive would get underway with the logs heading into the west fork of the Chippewa. At strategic points along the river, the “boats” would be patrolled with several men to each boat. This to avoid jams. Logs halted by a rock or other obstruction in mid-stream were described as a “center jam”. Logs obstructed on either side of mid-stream were “wing-jams”. ‘

Pictured is a photo of a Wannigan.