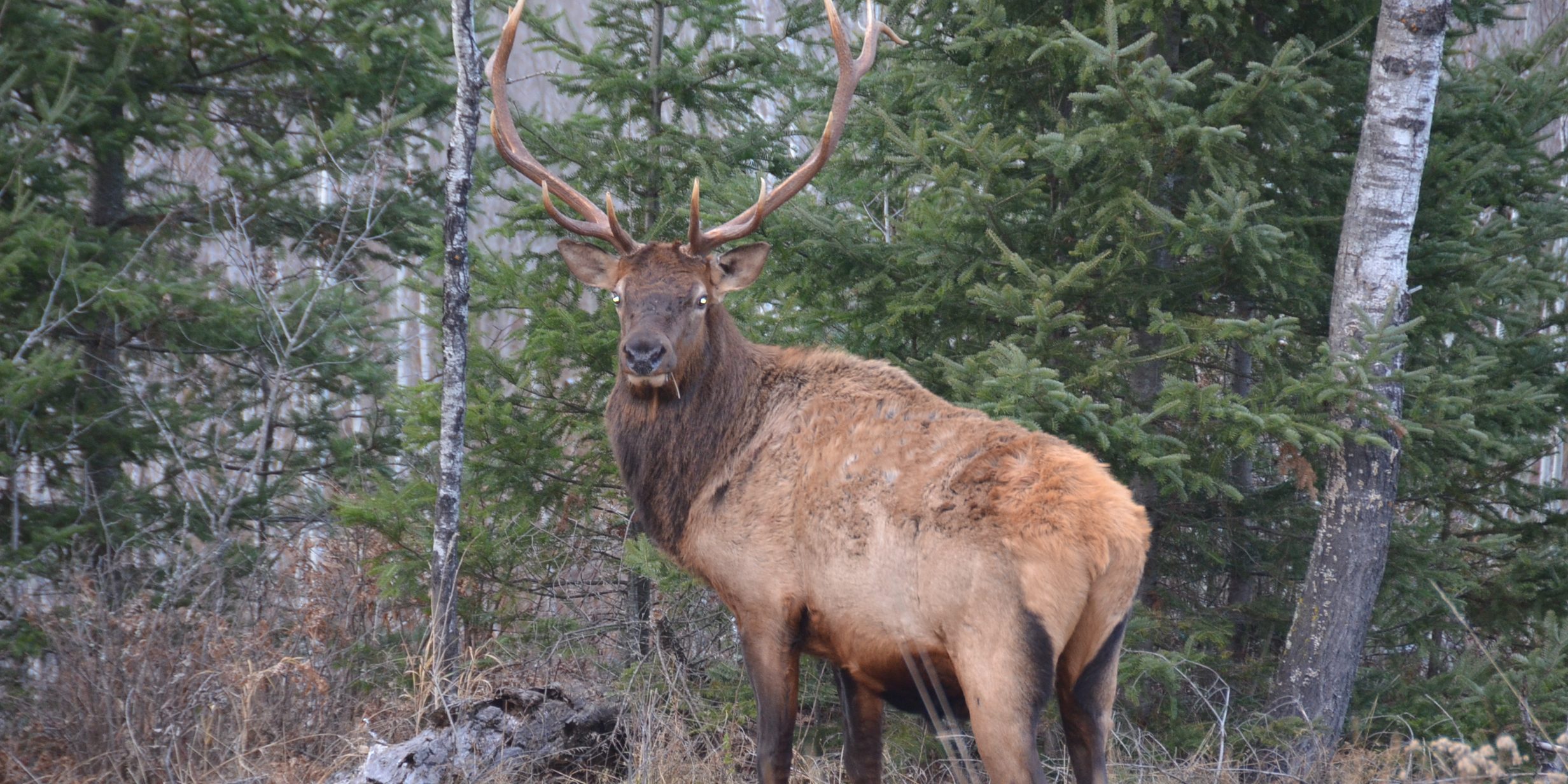 Winter 2015-16:  Last winter was one of the mildest ever recorded in northern Wisconsin with only 23 winter severity points (number of days with a temperature low of 0 degrees F or colder plus the number of days with 18 inches of snow depth or greater) for Winter, Wisconsin.  The previous winter (2014/2015) recorded 46 and the record breaking 2013/2014 winter was 167 points.  Any winter of 80 or greater points is considered a “severe winter” from a deer survivability standpoint.  Mild winters with early spring “green-ups” typically result in good elk productivity and survival.

Population Status:   From 130 trail cameras in the Clam Lake camera grid, a ratio of 43 calves per 100 cows was observed; this indicates an increasing population with approximately 60 percent calf survival rate.  Using birth rates for different cow age classes from data collected since 2002 we estimated that there would be 35 elk calves born across the entire Clam Lake Elk Range this year.  By the end of June 2016 we expect approximately165 elk in the Clam Lake herd.  With our early spring and lush vegetative growth conditions are favorable for good survivorship this year as well.

Elk Research on the Clam Lake Herd:  A collaborative effort by WI DNR and the US-Forest Service (USFS) and the general public placed 155 trail cameras on a grid overlaying the elk activity area around Clam Lake. A primary goal of this research is to lay the foundation for an accurate, precise, cost-effective, and sustainable elk monitoring system that will inform elk harvest management in perpetuity. One of the objectives towards that goal is to test a number of camera trap-based population estimators against known numbers of collared elk. The cameras will be visited every 2 – 4 months to switch out the secure digital cards, batteries, and clear vegetation. All photos are reviewed and screened through the formal Snapshot Wisconsin process and elk staff will try to determine individual identification of elk in photos. A variety of camera-based population estimators will be evaluated to estimate the elk population size in the Clam Lake herd.  Steps are underway to have this camera survey implemented in the field primarily by citizen volunteers.

Elk Habitat Improvements:  Eight different elk forage openings totaling 60 acres in size were created and another 102 acres were mowed on the Flambeau River State Forest (FRSF) and on the Sawyer County Forest in 2015.  Telemetry and observations have verified elk use on these managed acres.  During 2016, another 30 acres will be planted and another 163 acres will be mowed.

WI DNR foresters set up timber sales on the Chequamegon-Nicolet National Forest (CNNF) for the USFS  under the cooperative “Good Neighbor Authority”.  The USFS is also going through the National Environmental Protection Act review process to cut 6,300 acres of aspen within the “Black/Torch” Project.  WI DNR foresters have already set up salvage cut timber sales in the Moose Lake area to recover timber damaged by the 2014 wind storm.  Furthermore, the USFS continues to mow wildlife openings and ¼ of the ELF Line (total acreage of the ELF line is 360 acres) each year.  Timber harvest occurring on National, State and County Forest, and on Industrial Forest and private lands, are creating exceptional forage and predator escape habitat, and preparing quality habitat for the Kentucky elk anticipated to arrive in winter/spring 2017.

Getting ready for Kentucky Elk:  During the next 2-3 years, the Kentucky elk translocation project will focus on adding up to 75 new elk to the Clam Lake herd.  To accomplish this, all elk must be health tested and acclimated to the area prior to release.  Site preparations are underway for the construction of a seven acre health testing and quarantine facility on the Flambeau River State Forest (FRSF).  A great deal of work is involved in this undertaking including vegetation removal, site preparation, recycling of materials, and more.  The facility will consist of a double walled, 10-foot high, three compartment facility that will be constructed by a private fencing contractor this summer/fall.  Our goal is to have the entire facility complete by mid-fall.  If all goes as well as it has during the first two years of the elk reintroduction effort, elk arrival would be expected by early spring of 2017.

We received some welcome help in preparing the quarantine site included volunteers from the UW-Stevens Point Chapter of the Society of American Foresters.  They, along with elk project staff and citizen volunteers, helping cut down trees along the fence line alleyways during the weekend of March 2nd.  In addition, on the weekend of March 16th volunteers from the UW-Madison Student Chapter of The Wildlife Society helped take down the Thornapple/Haystack acclimation pen so that the woven wire from that pen could be recycled for use on the new quarantine pen.

Partnership Efforts: The WI DNR and USFS are cooperating under the Good Neighbor Authority and this effort should continue to improve elk habitat well into the future.  Other examples of partnership efforts were the volunteer help on the quarantine site by the UW-SP and UW-Madison student chapters listed above.

Future Focus:   During upcoming months, WI DNR and partners will dismantle and move elk pen components and handling equipment from the Jackson County quarantine facility to the new FRSF pen site.  In addition, the elk program staff will be developing additional wildlife habitat improvement projects where the state has land management responsibility.  These will not only benefit elk, but other species of wildlife as well.   Elk program staff gave an elk presentation to the Lac Courte Oreilles Tribal Youth Conservation Corps in June.  This group is scheduled to help with elk habitat work later in August.  Rocky Mountain Elk Foundation volunteers are planning to help place the fabric fence barrier on the FRSF quarantine pen later in September.