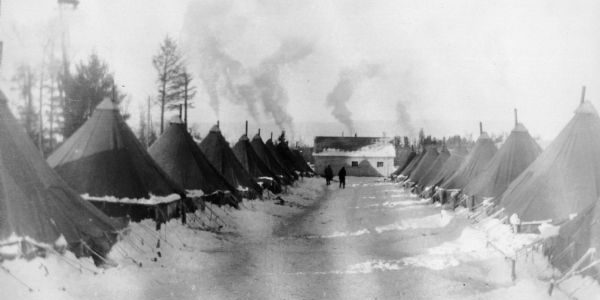 This summer our Clam Lake Community Building will be 75 years old. My next few Snippets will tell how this building came to be.

The 1604th Company CCC was formed at Fort Sheridan, IL in May of 1933. That summer the company moved up to Camp Beaver in Clam Lake, WI and operated under the direction of the Federal Forest Service with designation F-11. The company weathered the winter of 1933-34 in tents, construction of barracks beginning in the spring of 1934. They were known for their rugged football team that won its district championship. After nearly two years in the Chequamegon National Forest 1604th Company moved to the Camp Richland Center.

In June of 1937, the Clam Lake Community Association put in a request to the Federal Forest Service to obtain a building from the disbanded Camp.

Here are some of the reasons they listed as to why they were deserving of a building:

“Under educational activities the Community is at this time sponsoring a class in First Aid in connection with the American Red Cross in order to obtain the establishment of a station. We have also a Handicraft Class now in the process of organization. Beside these direct activities we give considerable assistance to the local school in matters that the school board is unable to finance, such as supplying a piano, victrola and playground equipment. We hope to sponsor a group of Boy Scouts in the future. In the matter of recreation, we hold a social meeting every month during the winter at which we welcome all the residents of the district for dancing, card games and our local game of four handed checkers. Each Christmas we have a party in conjunction with the school program supplying gifts for all the children in the community. In conservation matters we cooperate with the U.S. Forest Service in procuring and planting fish. Before the establishment of this Forest, this Community organized and equipped a local forest fire fighting crew, the only, I believe, in what is now the Chequamegon National Forest. In the past we have held our meetings, dances and classes in the local school house or in private homes, but, due to the increase in this community we are unable to follow this course and would be forced to curtail our activities or the membership of this organization and due to the isolation we hope it will not be necessary for us to do either. I sincerely hope that your department will be able to decide in our favor.” 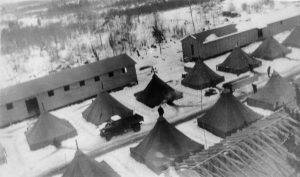 A response to this request was received from the Federal Forest Service. It was headed: CCC Camp Building Disposal Chequamegon Beaver Camp F-11.

Gentleman: In accordance with your request dated June 14, 1937, under the date of October 13, 1937, the following described buildings – 1 Barracks Building 112 by 20 – which was erected for use by the Civilian Conservation Corps, but which is no longer needed for that purpose, has been transferred to the Clam Lake Community Association. Signed: Lyle F. Watts Regional Forester.

It was requested that the building be removed within thirty days.

On December 27th, 1937 a letter was sent to the County Highway Commissioner. It stated:

“This Association has acquired a building which will have to be moved from Camp Beaver to State Trunk Highway No. 77 from the Loretta Fire Lane to the Community Lot, just west of the village. Due to the size of the building the road will be temporarily blocked for about thirty minutes at a time. We will place men at each end of the road to protect traffic during the time it will be blocked. Will you kindly grant us permission to do so? “

Permission was granted to move the building, thus beginning the transfer. Members of the Association went out to inspect the structure and decided that the most practical way of removal would be to dismantle it and bring it in sections. They decide to look into hiring a service from Mellen to do this and direct a committee to look into it by checking into buildings that have been moved and how well it was handled.

In March of 1938, in a letter sent to encourage application for membership in the Association, it is stated: “We received a gift from the Government of one of the buildings from Camp Beaver which has been moved in sections to our lot on Upper Clam Lake to be remodeled into a Club house.”

For whatever reason (probably lack of funds) this issue was not addressed again until 1941. Meetings continued to be held in the School House or in officers’ homes with the sections of the Camp Beaver barracks sitting unused (for the most part) on the Community lot. The story (and it is a good one!) of how our present Community Club building was built, I will save for next month.

As side notes: From 1933 to 1942 there were nine CCC Camps within the Clam Lake and Glidden area. Men assigned to these camps were there for a minimum of six months with the maximum period of service being two years. Photographs I have seen of CCC Camp companies show over one hundred men attending during any given session.

State Highway 77, in the 1930’s, would have gone down what is now Clam Lake Road (often referred to as Old 77) where the present day Community Club sits.