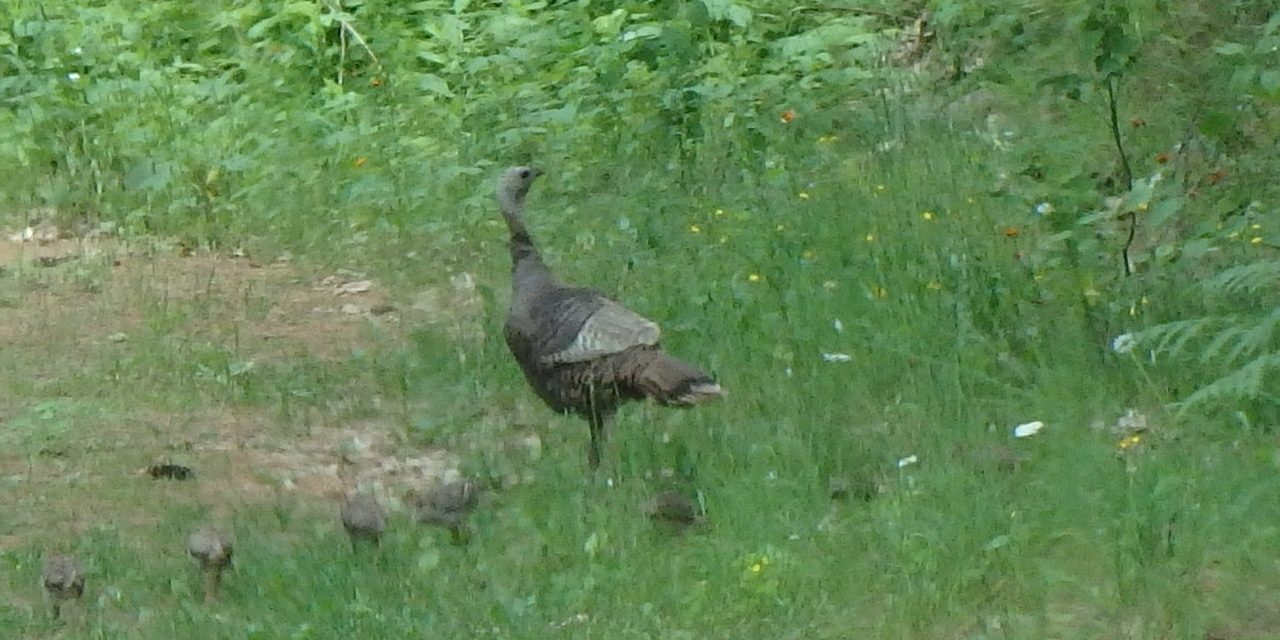 We’ve been on a holding pattern with the weather as of late. Mainly dry days have been on tap with us hoping for some much needed rain. Doesn’t take long for the forest to dry. Thankfully, towards the end of the weekend, we did see a few downpours. The vacationeers have been enjoying the nice summer days as is evident by all the people around. 4th of July signals the height of our summer tourist season in the village and it shows! Great to see everyone enjoying our forest and all that it has to offer.

ON THAT NOTE – LOON REMINDER: When out and about enjoying our lakes remember that this is loon chick season. A pair have successfully hatched on Upper Clam so care needs to be taken when out and about on that lake. Upper has traditionally been a very busy lake in the summer so extra attention needs to be paid when using it. We want to help these wonderful creatures survive and not threaten their existence. Thank you! (WARNING! If found harassing a loon one would be facing a $500 fine. DNR officers often make surprise visits to lakes during loon season to check the activity on the lakes.)

ST. GEORGE’S CHAPEL: Mass is celebrated every Saturday at 6:00 pm at our historic “Chapel in the Woods”. St. George’s is a log cabin chapel built in 1948 in honor of a son taken too soon. Stepping inside brings back memories of a simpler era when hand hewn log buildings such as it is were the norm. The Chapel has never had running water, instead relying on a simple outhouse. Again, harkening back to an era gone by. We invite you to “come pray with us” in our simple chapel made from the forest that surrounds it. (St. George’s has served as a summer mission chapel for the past 72 years – it’s first official Mass held in 1950.)

MEETING REMINDER: On Thursday, July 14th the Clam Lake Community Club will be holding their monthly meeting beginning at 5:00 pm. After the short meeting there will be a Pot Luck followed by some Clam Lake Style Bingo led by Master Bingo Caller Ace Griffaw. Remember, if Ace doesn’t have your winning number, he will definitely try to find it! Good luck to one and all!

HISTORY MOMENT: An excerpt from “A Journey to Mellen” (a history of Mellen) dated 1904: “MJ Collins recently opened a road to Clam Lake, although it wasn’t too much of a road, yet better than a trail. The fishermen loved it!” This “road” was probably a precursor of what we know today as GG north originally known as the “Mellen Road” and later Forest Highway 32 north. Before 1904, this road was most likely part of a series of Native American trails linking various areas. These are shown on the survey maps of the area that were done after Wisconsin became a state. Of course, in 1904, the only way to traverse this “road” would have been on foot or horseback. No cars. Apparently, the fishing was worth it!

TURKEYS GOBBLING IN JULY? With mating season over why do male turkeys (toms) gobble in July? At this time the toms are less competitive and will begin to gobble to seek each other for company. With the hens busy with their broods it’s time for the toms to enjoy some much needed “guy time”. They will also gobble to locate hens that did not breed or have lost their nest.

Pictured is a mother turkey with her brood.