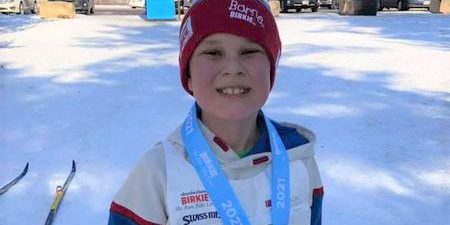 What a glorious reprieve this week has been! Mild temps and sunshine have been the order of the day! This has been most twelcome after our weeks of sub-zero days and nights. Spring is definitely in the air making us all walk with an extra spring in our step. I had 46 degrees here in the deep, deep woods one day. The melt is beginning…..

CONGRATULATIONS go out to Matthew Markee, aged 9, son of Scott and Jill (Eder) Markee on completing his 5th Barnebirkie! This year, in consideration for Covid-19, Matthew opted to do the virtual ski at the Superior Municipal Forest. Jill reported that he had completed quite a difficult course with plenty of hills and covered 3.2 k. Good job Matthew!!!! Matthew is the grandson of Jane and the late Don Eder of Clam Lake.

ELK UPDATE: I had a chance to speak with wildlife/elk biologist Josh Spiegel last week asking how the elk are making out during the winter season. He said, contrary to other years, the winter groups are moving around a bit more. Usually, as winter progresses the groups tend to stay in one place whereas this year they are moving around to various logging sites in the Clam Lake area to forage. Josh attributes some of this to the fact that the snow depths in the forest are lower than in previous years making it easier for the elk to move about. He was also happy to report that approval has once again been given for their winter elk work. This consists mainly of re-collaring individuals that need it.

AMBULANCE SERVICE NEED: Bud Rubeck of Clam Lake was recently interviewed by WPR for a piece they did on the loss of ambulance service in some of our northern townships. In the article and broadcast Bud recounted what happened to him four years ago when he was severely injured and required immediate ambulance and helicopter transport. If not for the quick response of Great Divide he would not have survived. It was an emotional journey for him and his wife, Julie, to revisit those moments. He could not emphasize enough how important obtaining ambulance service is for our area communities that comprise mainly senior citizens. Doug Thorp, Town Chairman for the Town of Gordon, was also interviewed as were others working in the townships and ambulance services. We thank Bud for telling his story to highlight how important this issue is to us living in the northern communities. We also wish to thank WPR for bringing attention to this situation that is impacting so many. To read the full article go to www.wpr.org/when-someone-calls-911-theres-no-guarantee-help-will-come-several-northern-wisconsin-towns

FYI – THE FOREST WE CALL HOME The Chequamegon-Nicolet National Forest covers 1.5 million acres of land that was shaped by the glaciers. The Nicolet Forest was established in March of 1933 (88 years ago) by President Hoover and the Chequamegon was established in November of 1933 by President Roosevelt. The land used to form the forests was abandoned and tax delinquent lands bought by the Federal Government in 1928. Much of the lands purchased were left by lumber companies once they had depleted the forests of white pine and hardwoods and had no future use for the properties. Since their creation, the forests have made a comeback thanks to the reforestation efforts that were carried out during the Great Depression by the men of the Civilian Conservation Corps (CCC). During the CCC’s 10 years of operation thousands of acres of trees were planted. The two forests were combined in the 1990’s. The word Chequamegon is derived from an Ojbwe word meaning “place of shallow water”.

Pictured is Bud Rubeck in a photo taken for WPR. Also pictured is Matthew Markee upon completion of his 5th Barnebirkie.