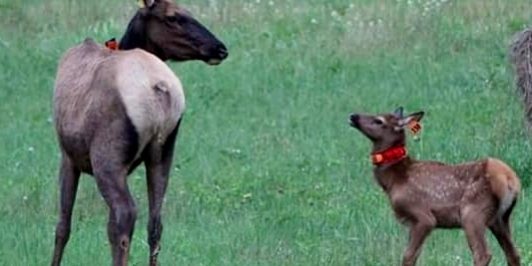 Things are greening up in a hurry! Wow! What a difference a week can make. Spring has definitely sprung. Enjoy!

ELK CALVING: I spoke with Josh Spiegel, Sawyer County Wildlife Biologist, for an update on the 2020 elk calving. He said they will no longer be going out to physically collar calves wanting to let mother and baby bond without human interference. He stated that it was better for the animals not to be disrupted at this time. Instead, they will track the cow’s movements via her GPS collar. Cows will isolate themselves when preparing to give birth. They can continue to monitor her to see how long she self isolates indicating she has had a successful birth. From data compiled over many years of collaring, the biologists can reasonably predict how many births take place by this process. All in all it will be a more hands off approach as the elk assimilate more and more into the wild. He also asked me to caution drivers to be careful during the calving season when calves can suddenly appear on the road.

AND….what about the four elk (previously from the Flambeau herd) that were relocated to Clam Lake after taking a jaunt to Medford? Josh reported that they have happily settled in on the southern end of Cattail Lake. The two adult cows of this foursome are expected to give birth this spring. We welcome all these new additions.

THIS YEAR would have marked the 40th year that Ralph and Cherie Cornell, owners of the Chippewa Tavern, have hosted the Veterans for their traditional Memorial Day dinner following the ceremonies in Glidden and Clam Lake. Due to the pandemic, this year’s dinner was cancelled thus breaking the tradition. We wish to thank Ralph and Cherie for 39 years of hospitality to those that have served. Never fear, they will be back next year to celebrate their 40th!

HISTORY MOMENT – MAY 1918 – From the Glidden Enterpise, “The Scotford family went (from Glidden) to Camp Fire Island Camp, Clam Lake on Monday for the summer season. Mr. Scotford has developed his camp wonderfully during the past several seasons and looks forward to a prosperous summer.”

On to the June Birthday List – we wish all those celebrating birthdays in June a very Happy Day!

Those celebrating wedding anniversaries in June are:

We hope they have a wonderful day!!!

Speaking of birthdays – I got a call from Dodo Dumanch, who turned 90 on May 3rd, expressing her thanks to all that sent her birthday cards to celebrate her special day. She received close to 200 cards (her furthest came from the Philippines) and said every day was like a party when the mail would arrive. She so enjoyed reading all the special greetings and remembrances people sent. Thank you to all!

Pictured is a cow elk and her calf. Photo courtesy of Rob Sparhawk.