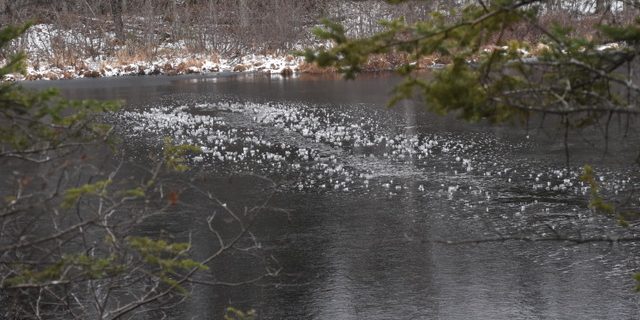 This week we had a continuation of our mild weather with temps above freezing most days. Considering what we had last year at this time we’ll take it! Been a very mild November. All good!

GET WELL WISHES go out to Alice Filter as she recovers from surgery. We wish her a speedy recovery.

REMINDER: Free Covid-19 testing is available every Wednesday at the Winter Fire Hall from nine to one. Testing is available for all five years and up. With covid on the rise in our area communities please do all you can to protect yourself and your neighbors. Thank you!

CORRECTIONS: Forgotten in last week’s December birthday list were Doctor Tom Chisholm who will be turning 90 years young on December 18th and Claire Steffen’s son Sammy whom will be celebrating his special day on the 21st. We wish them both a very happy day!

DEER ON ICE: Last week Gary Bartholomew of Spider Lake related that as he and his wife, Dottie, were getting ready for their day they looked out their window and saw what appeared to be a trench that had been made in the ice near their home. Their place sits on what is known as “The Narrows” of Spider Lake where the lake narrows down to form a channel that flows into Moquah Lake. The crossing where the broken ice was seen had been an area often used by deer to go from shore to shore. Gary said the water was only 3 or 4 feet deep with the newly formed ice probably only an inch thick. He didn’t notice any tracks going to or from the few feet of broken ice but from observation concluded this had to have been a deer that had broken through. It remains to be seen whether the deer survived it’s ordeal. Speaking with elk biologist Josh Spiegel he said that if deer or elk fall into water at shoulder height they often have trouble getting their pencil like legs up far enough to escape. He said often times they will exhaust themselves in the attempt using up all their energy so even if they do make it out they will die shortly thereafter or succumb and float under the ice. Time will tell in this instance.

HISTORY MOMENT: An excerpt from a December 1936 (84 years ago!) issue of the Glidden Enterprise: “CAMP FIRE ISLAND CHANGES OWNERSHIP – Camp Fire Island on Upper Clam Lake was sold last week by H.A. Scotford to Mr. Hansen of Racine. The resort at Camp Fire Island has not been in operation the past few years due to the Depression. Mr. Scotford decided rather than try to put it in shape for business it would be more advantageous to sell it. It is Mr. Hansen’s intention to spend the winter here, making repairs as are necessary to the buildings, so that he and Mrs. Hansen will be able to commence business activities in June. Mr. Hansen has a number of improvements planned. Camp Fire Island was first operated for the public thirty years ago when it was accessible only by tote team over the old West Fork Road (Highway 77), what was in those days the remains of the tote road used by the pine loggers in their operations twenty-five years before. As a fishing camp it had no equal in Northern Wisconsin. Later, as the railroad and still later, as the highways made it easy to get to Camp Fire Island and the West Fork country the type of summer visitor changed, and Camp Fire Island became a summer resort, with many successful seasons to its credit. Mr. and Mrs. Hansen hope their efforts will once again make Camp Fire Island an attraction for summer visitors.“

Pictured is the photo taken by Gary Bartholomew of the ice trench that was made near his home. He titled it: “Didn’t Make It”.