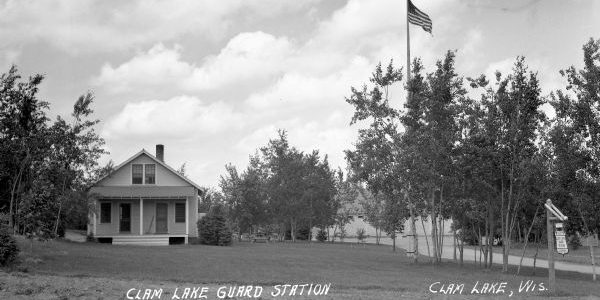 With the passing of our Guard Station I wanted to write about a memorable moment in its history.

Forest Service Guard Stations are defined as: “An administration building located in a National Forest which is not at the same location as the District Ranger’s headquarters. They usually have office and workshop space, tool storage and often sleeping quarters.” They were set up to facilitate work at remote sites.

Clam Lake’s Guard Station sat outside of the village on Highway 77. The photo shows what it looked like back in the late 30’s early 40’s.

This is a story of tragedy and bravery on the part of the Clam Lake CCC Camp.

In 1940, Ray Scribner and his wife, Magnhild, were the “keepers” at the Clam Lake Guard Station.

“On June 14th, 1940 an explosion of a gas stove resulted in very severe burns to Mrs. Scribner, and destruction of the Clam Lake Guard Station. Mrs. Scribner was alone in the residence portion of the building when a new gas range exploded covering her with flames. The telephone operator, Robert Bolda, was in the office part of the building. He heard the explosion and rushed to her aid, carrying her from the building and with no other means of squelching the flames rolled her in the grass. As soon as aid arrived she was taken to Camp Clam Lake (CCC Camp) where she received first aid and was then taken to the Ashland Hospital.

The Guard Station was completely destroyed, along with all its contents. The operator and Mrs. Scribner were the only ones present when the fire resulting from the explosion occurred. Aside from the telephone* and fire service equipment there was a considerable quantity of supplies in the office. Only after the most strenuous work on the part of the Clam Lake Camp personnel was the repair shop saved. Fire-fighting was more than usually arduous because of the high winds prevailing. Mrs. Scribner died the next day due to her injuries.”

Although tragedy had struck, the Guard Station was promptly rebuilt and operated for many more years without incident.

Due to expanded forest service road networks most Guard Stations were demolished or abandoned by the 1990’s.

The Clam Lake Guard Station was torn down in the fall of 2016.

*The “telephone” mentioned was probably a hand held transmitter used by the Forest Service to alert of fire. Telephone service did not come into Clam Lake until later.